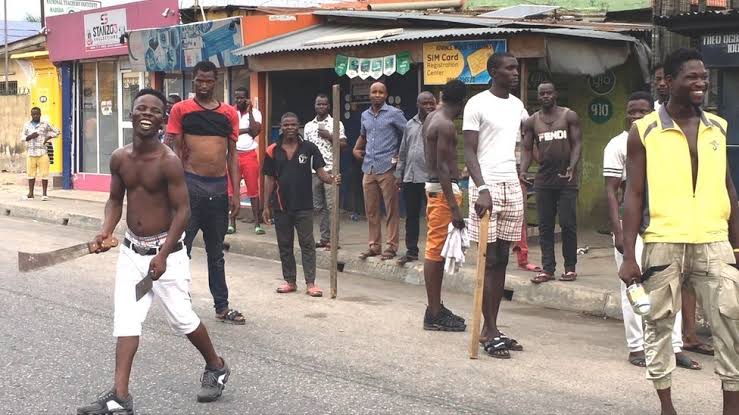 The Oniraniken of Iranike (Elewu Oku), Oba Adewale Adeniji invaded a community in Simawa area of Ogun state today with the dreaded ‘1 Million Boys’ led by popular land grabber, Sir K Oluwo to forcefully take over a 4,000 acres of land that doesn’t legally belongs to him.

This allegation was laid against the traditional ruler by eyewitnesses who ran for their lives upon seeing the land grabbers with heavy ammunitions terrorizing residents of the community. At the moment, some of the residents are yet to return to their homes over fear for their lives and properties.

Investigations revealed that Oba Adewale Adeniji has been parading himself as the owner of the 4,000 acres of land whereas, the court declared only 1,325 Acres as his own according to plan no AAT/OG/03/94 dated 23rd March 1994 made by Surveyor Tunji Adewole. The act of grabbing land from rightful owners by the king is said to have been happening for many years.

Due to his many atrocities in the land, his family members disowned him and described him as a thief who uses his office as a traditional ruler to take over properties of innocent populace illegally. Also, there are claims that a high ranking security operatives are supporting the actions of Oba Adewale Adeniji Oniraniken for personal gains.

Earlier this year in January, the Ogun state house of assembly invited Oba Adewale Adeniji to appear before the house in order to present a proof that he owns the 4,000 acres of land but unfortunately couldn’t provide any.

Furthermore, The National deputy chairman of the Police Community Relation Committee (PCRC), Alh Ibrahim Olaniyan written to the ministry of local government and chieftaincy affairs to immediately suspend Oba Adewale Adeniji from his position, while presenting a five-point solution to the menace of the traditional ruler.

‘’This is a Clarion call to you and your ministry to without delay suspend the chief land grabber (Oba Adewale Adeniji ONIRANIKEN of IRANIKE) in Simawa and environment.

Secondly, set up a committee of enquiry to investigate the activities of this Oba.

Thirdly, it may interest you to know that the social media is agog with the dangerous events happening in Simawa and environment right now.

Fourthly, the governor himself at various times acknowledge the vital roles in security of lives and properties played by PCRC in the state, even recently when the Inspector General of Police visited Ogun State.

Fifthly, a stitch in time saves nine says that popular adage. Relevant agencies and institutions are been contacted and informed to stem the crisis brewing in Simawa before the community turn to war zone.’’

Also, members of the residents have called on President Muhammadu Buhari, The inspector general of police, Alkali Baba, the governor of Ogun state, Dapo Abiodun to wade into the crisis as it continues to threaten the security of lives and properties in the state.