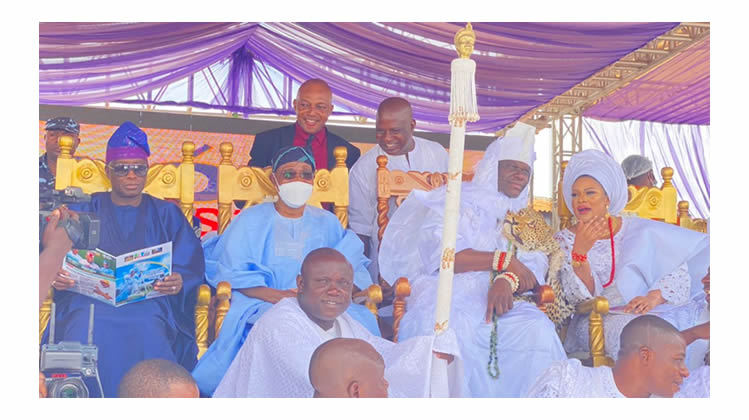 The new wife of Ooni of Ife, Mariam Ajibola, on Saturday stepped out with her husband, Oba Adeyeye Ogunwusi, for the first since she got married to the royal father on Saturday as the annual Olojo Festival got underway in Ile-Ife, Osun State.

Eyin Ko Lokan’ (Its Not Your Turn) – Melaye Blasts Tinubu

Mariam, who attended the event with her husband, and other dignitaries that included; Minister of Interior, Rauf Aregbesola and Osun state Deputy governor, Benedict Alabi, among others, was dressed in all white attire, and was seen speaking with the royal father as different groups paid homage to the Ooni during the ceremony.

The new Yeyeluwa of Ife is attending Olojo, a major cultural celebration in Ile-Ife, during which Ooni will adorn ‘Are crown,’ for the first time as Ooni’s wife.

The new queen was ushered into Ile Oodua Palace in Ile-Ife at 8pm on Tuesday, September 6 by her mother and other members of her family from Kogi and Kwara states and since then, she had not attended any public outing.