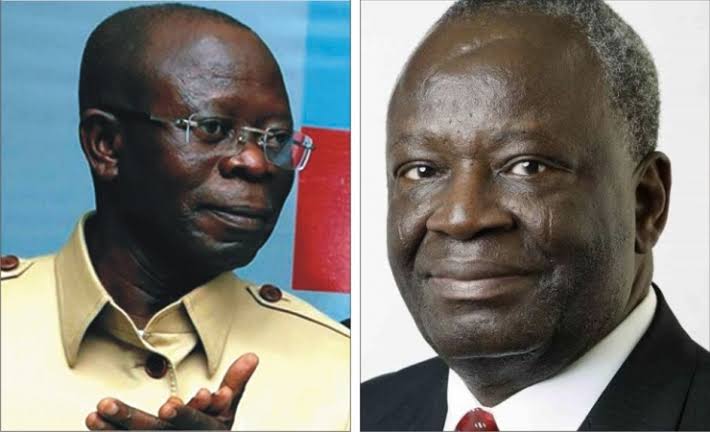 The Peoples Democratic Party national campaign council for Edo Governorship Election has called out the Buhari Presidency over a trending video allegedly showing former All Progressives Congress, APC, national chairman, Adams Oshiomhole and the Chief of Staff to the President, Ibrahim Gambari discussing the “arrest” of unnamed persons.

The amateur video showed Oshiomhole walking briskly alongside Gambari, with the former Edo state governor saying, “Arrest…deal with and the whole will change,” while Gambari responded saying “we will go beyond…”

Addressing a press conference at the party’s headquarters on Tuesday, national publicity secretary of the party, Kola Ologbondiyan said the arresting comment may not be unconnected with the September 19 governorship election in Edo state.

He said: “Nigerians were alarmed by the video in which Oshiomhole was seen emphatically urging the Chief of Staff to Mr President on the need to clampdown on certain unnamed Nigerians to achieve political suppression and submission ahead of the Edo election.

“Our national campaign holds that the presence and involvement of the Chief of Staff to the President and the fact that the discussion held within the precincts of the Presidential Villa has made the Presidency complicit and place a huge burden on President Muhammadu Buhari.

“Already, there is anxiety in the public space that the discussion between Oshiomhole and Prof. Gambari as captured in the video is an extension of discussions that must have held behind closed doors in the Presidential villa.

“The video has validated earlier revelations of plots by Oshiomhole and the APC governorship candidate, Osagie Ize-Iyamu, to use compromised security operatives being mobilized by certain individuals in the Presidency, to arrest innocent Nigerians, including traditional, faith-based and community leaders on trumped-up charges, ahead of the Edo election.”

Ologbondiyan who doubled as the secretary, publicity sub-committee of the campaign council, further said the people of Edo state now know who to blame should things go wrong in the governorship poll.

“Nigerians and the people of Edo state now know those to hold responsible should there be cases of illegal arrests, assassinations and unexplained killings, sudden disappearances of prominent people, accidental discharge by federal security operatives and mysterious accidents in the course of this Edo governorship election.

“The PDP national campaign council on Edo governorship election charges President Buhari to reassure Nigerians by immediately ordering that Adams Oshiomhole and Prof. Gambari be pulled in for questioning over the video.

“Anything short of decisive action on this matter will further indict the Buhari Presidency especially coming on the heels of public anxiety over Mr President’s widely condemned comment on the use of security forces for elections.

“Our campaign, however, wants the APC and Oshiomhole to know that their ignoble plots against the people of Edo state have come to nought as the people are at alert and will use every legitimate means available to defend they’re already expressed will in support of the candidate of our party, the PDP, Governor Obaseki in this election,” he added.

Vanguard could not verify the authenticity of the eight seconds video at the time of filing this report.