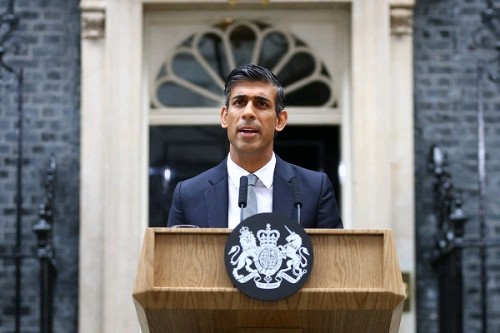 Prime Minister Rishi Sunak is considering a crackdown on foreign students bringing dependents and studying “low-quality” degrees after net migration to the UK climbed to a record half a million.

Downing Street indicated that plans to bring overall numbers down could include putting up barriers for international students’ loved ones and restricting admissions to top universities.

This would be in line with proposals being explored by Home Secretary Suella Braverman, who has previously complained about foreign students “bringing in family members who can piggyback onto their student visa” and “propping up, frankly, substandard courses in inadequate institutions.”

The estimates were compiled by the Office for National Statistics (ONS), which said the jump was driven by “unique” factors including visa schemes for Ukrainians and Hong Kong citizens, and students arriving from outside the European Union.

People arriving on study visas accounted for the largest proportion of long-term immigration of non-EU nationals, at 277,000, or 39% of the total, the according to the ONS.

The Prime Minister’s official spokesman insisted Sunak was “fully committed” to bringing overall immigration levels down and blamed “unprecedented and unique circumstances” for the record high.

The official said: “We’re considering all options to make sure the immigration system is delivering, and that does include looking at the issue of student dependents and low-quality degrees.”

But such moves could meet resistance from other parts of Whitehall.

“There needs to be a long-term plan if we’re going to bring down migration in a way that doesn’t harm the economy,” he said.

“We are recognising that we will need migration for the years ahead – that will be very important for the economy.”

The Department for Education could raise concerns over universities’ funding if the number of high fee-paying international students is cut.

“With the lifting of travel restrictions in 2021, more students arrived in the UK after studying remotely during the Covid-19 pandemic,” she added.

In a related development, The U.S. Mission is expanding the eligibility period for nonimmigrant visa renewals from 24 months to 48 months. Applicants whose previous U.S. visa expired within the last 48 months or will expire in the next 3 months may now qualify to renew their visa without an interview. The U.S. Mission is also opening thousands of visa renewal appointments to assist applicants who wish to renew their visas.

You may be eligible for a visa renewal without an interview if your application is for a B1/B2, F, M, J (academic only), H, L or C1/D (combined only) visa, AND you meet each of the following criteria:

Your previous visa was issued in Nigeria.

Your previous visa is in the same classification as your current application.

Your previous visa was a full validity, multiple entry visa.

Your previous visa expired within the last 48 months or will expire in the next 3 months from the date of application.

You have all your passports covering the entire period since receiving the previous visa and the passport with the most recent visa.

You have never been arrested or convicted of any crime or offense in the United States, even if you later received a waiver or pardon.

You have never worked without authorization or remained beyond your permitted time in the United States.