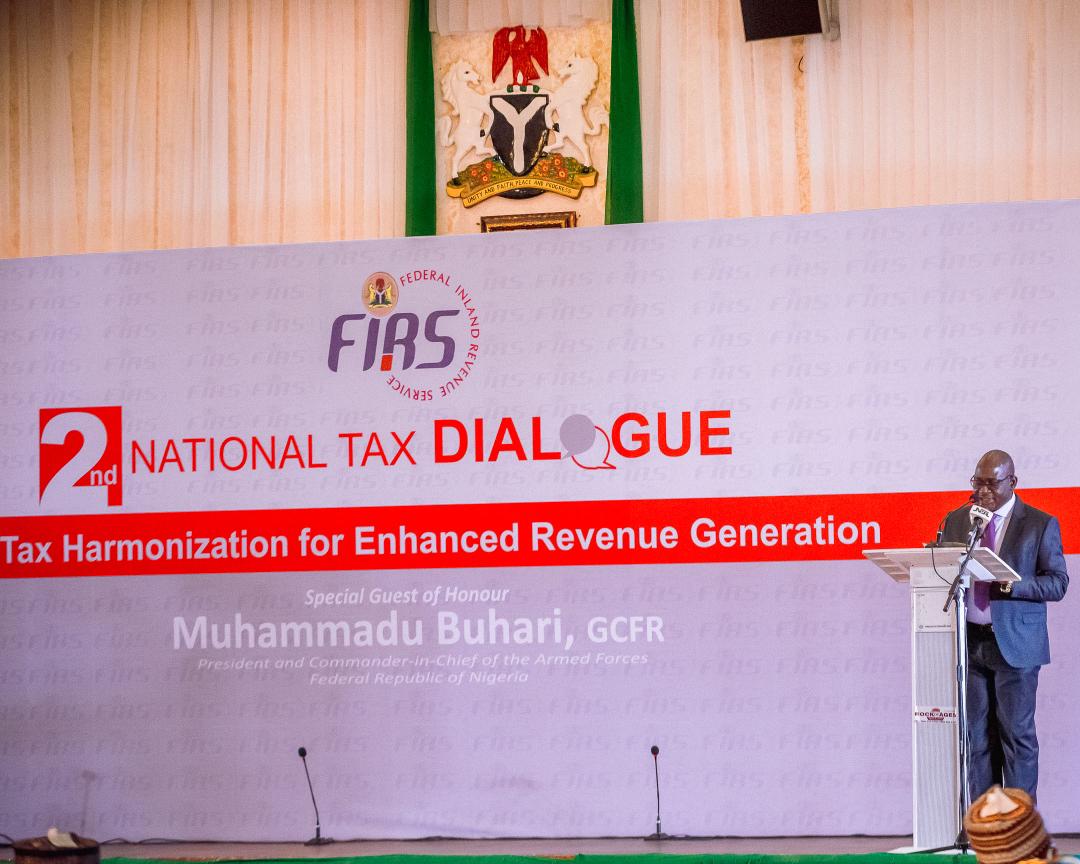 The Executive Chairman of the Federal Inland Revenue Service (FIRS), Muhammad Nami while calling for all hands to be on deck to support the tax system and make it function efficiently has urged politicians to treat tax revenue generation as an apolitical issue.

Mr. Muhammad Nami said this while delivering his opening remarks at the 2nd Annual National Tax Dialogue with the theme: “Tax Harmonisation for Enhanced Revenue Generation”, at the State House Conference Centre, yesterday.

While highlighting the revenue profile of the country in 2021, which showed that the FIRS had contributed a monthly average of 59.45% of revenue shared by FAAC, Mr. Nami stated that it had become clear that the survival of the nation is dependent on tax revenue.

“All hands must be on deck to support the tax system and make it function efficiently. However, it is surprising that some people have begun to play politics with tax revenue generation. We humbly invite the President to step-in to dissuade political tax gladiators to sheath their swords. Tax revenue is an inherently apolitical issue; it should be treated as such by all, irrespective of their political leaning.”

Muhammad Nami further highlighted how the FIRS was able to record an unprecedented feat in tax revenue generation in 2021, where the Service surpassed its target and collected N6.4 trillion, the highest collection ever in the history of the FIRS.

Speaking on the theme of the event, the FIRS Executive Chairman noted that the dialogue was imperative given the prevalent issues of competing revenue agencies.

“This discussion is imperative,” he said, “in view of the fact that despite our 38 tax authorities, several tax laws and numerous taxes or levies, majority of the taxpaying public still remain outside the tax net.

“The tax-dodgers found it convenient to meander among the competing revenue agencies escaping their tax obligations. The result is suboptimal revenue generation at all tiers of government.”

Declaring the Dialogue open, President Muhammadu Buhari stated that a key deliverable of the dialogue is to promote synergy in tax administration among the different tiers of government.

President Buhari also noted that: ‘’Harmonising taxpayer identification across the country is a good start; but we must do more to promote ease of doing business—including ease of tax compliance—in Nigeria.

”On our part, we have started by clarifying in the 2021 Finance Act that FIRS is the sole authority to administer tax for the Federal Government.

”This clarification became necessary in order to avoid taxpayers being burdened with multiple tax compliance obligations towards different agencies of the same government.

In her opening remarks, the Honorable Minister of Finance, Budget and National Planning, Hajia (Dr.) Zainab Shamsuna Ahmed highlighted the importance of the National Tax Dialogue, stating that it was designed to engage stakeholders in the Nigerian tax-space in meaningful discourse so as to glean information, ideas and experience in the aid of policy formulation and improved tax environment.

“We have observed that countries having lower economy and fewer tax base but streamlined tax administration has fared much better than Nigeria in terms of tax revenue collection; and ratio of tax-to-GDP.

“The goal for this year’s National Tax Dialogue is, therefore, to kick-start the discussion for the harmonisation of the fragmented tax systems into a coherent whole for improved tax revenue collection for all the governments in the Federation,” the Honorable Minister stated.

The 2nd National Tax Dialogue was also graced by the Secretary to the Government of the Federation, Boss Mustapha, the Honorable Minister of State Finance, Budget and National Planning, Prince Clement Agba, the representative of the Ekiti State Governor and Chairman of the Nigeria Governors’ Forum, Mr Makinde Araoye, Oba Adeyeye Enitan Ogunwusi, the Ooni of Ife, among other dignitaries.

The FIRS also used the occasion to also celebrate and reward Nigerias highest paying and most complaint taxpayers, including MTN, Shell Petroleum Development Company of Nigeria, NOCACO, AIRTEL and CHEVRON.