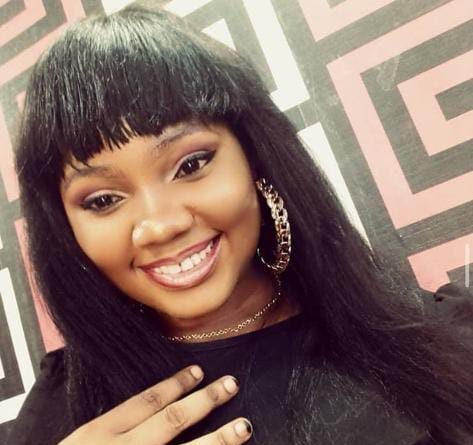 Yetunde Otabajo popularly known on social media as Mhiz Hilarious Pretty and GG AUTO GELE on the is at the centre of a paternity scandal.

Few days back, Otabajo allegedly stormed the internet with a pseudonym JoyDaniels but with her face on the profile to allege of being impregnated by her married lover.
She alleged that she’s being neglected after she got pregnant for the former banker identified as Rotimi.

The lady who claimed to be a Celestial Church of Christ and a wannabe celebrity makeup artist boasted of using spiritual means to deal with Rotimi and his wife except the man abandons his wife and move in with her.

It was learnt that the post that was viewed by family members got many furious as to why the lady would go to such a length of threatening and courting unnecessary publicity that amounts to online bullying.

A family member who is close to the lady said her actions became unstable since the man in question has raised an issue of paternity test to ascertain if truly he is the biological father.

“The man has not denied of their affairs, but he just insisted on DNA and since then, Yetunde has thrown all caution into the wind, an action that brought so many suspicion” he explained.

Yetunde, a single mother of one also hinted of how the father of her daughter bolted away about nine years ago when she was causing all sorts of uncomplimentary behaviour to the alleged lover. The alleged father of the girls has not be seen ever since.

When our source got in touch with Rotimi through his Facebook, he admitted knowing the lady and claimed to have been supporting her financially, adding that there’s no problem in his house as to the matter while everything will be resolved after the paternity test. “All her cyber bully can’t work, if she likes, she can go to CNN, the right thing must be done at the appropriate time” he explained.

All efforts to speak with Yetunde were unsuccessful and she eventually blocked all access to her page.