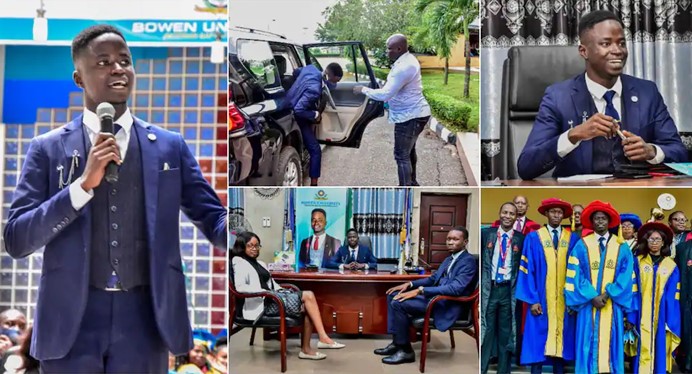 A student of Bowen University, Olasubomi Olopade, has celebrated a historic feat after becoming a day Vice Chancellor (VC) of the institution.

The young man took to his LinkedIn page to share some adorable photos after winning the contest that gave him the VC position.

Olopade assumed the position of vice chancellor on Wednesday, June 16, after winning the A Day Vice Chancellor contest.

He shared the news on LinkedIn:

”Wednesday, 16th of June, 2021 was a significant day in my life and in the life of Bowen University I was privileged to be the Vice Chancellor of Great Bowen University for the day, having won the A Day Vice Chancellor contest. The process involved registration, cognitive assessment tests and PowerPoint presentation on an alumni and a final election for the top three.

I wasn’t alone as I was assisted by my two Deputy Vice Chancellors, Ibukunoluwa Areo and James Joshua. Together and collaboratively we administered the running of the University.

These pictures tell a story. I started my day with a special breakfast, guard inspection, assumption at the office, presided over Batch B matriculation ceremony, addressed the congregant of students and staff. Thereafter I had T.V, radio and newspaper interviews.

Meetings with Principal officers also followed. Thereafter, I paid courtesy visits to statutory places and Directorates of the University and I penned my signatures to a plethora of documents involving funds disbursement.

I rounded my day at 9pm, having had a meeting with the Student Body and a few guests who came beckoning on their Vice Chancellor.

I wouldn’t have done this without the help of God, Parents, friends, and tagged mentors whose constant admonitions has kept me going. Specifically, I am grateful to my alumni mentor, Onyinye Enyioha whose help and support enabled my access to the finals…”