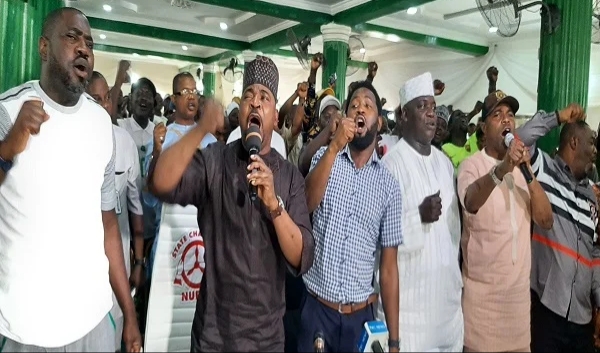 Rafiu Olohunwa, a former Lagos State Chairman of the National Union of Road Transport Workers has called on aggrieved members of the state chapter who had pulled out of the national body to take a volte-face and seek honest dialogue in resolving the lingering conflict.

This was made known on Monday by the ex-NURTW boss in an interview with the News Agency of Nigeria in Lagos.

Olohunwa urged the suspended chairman, Musiliu Akinsanya, and his followers to retrace their steps into the main body of the NURTW.

Olohunwa, who was Lagos State NURTW chairman between 2008 and 2011, said that the advice became necessary in the interest of peace and progress of the union.

“Whatever every one of us may have become today as a unionist is by virtue of our membership and service to the NURTW. Therefore, we should not be seen to be taking any action that will jeopardize the unity and integrity of the union,” Olohunwa said.

The erstwhile union boss equally urged the national body of the union to be magnanimous enough to accept its estranged Lagos State Chairman back into the fold, stressing the supreme importance of dialogue as the best option for dispute resolution.

“There’s nothing so difficult that genuine dialogue can not resolve; both parties should embrace dialogue so as to resolve their differences,” Olohunwa noted.

Recall that Akinsanya, popularly known as MC Oluomo, had last month announced the breakaway of the Lagos State chapter of the NURTW from its national body following his suspension from the association for “acts of insubordination and gross misconduct”.

Oluomo in his address titled, ‘Crisis in NURTW’, MC Oluomo had said, “There has been some crisis in our umbrella body, NURTW. All attempts to have an amicable resolution have failed. In fact, we have protested to the Lagos State Government about the state of affairs in our Union.

“Being law-abiding and responsible citizens, we have decided to explore all avenues for peace in the interest of all, we will not support any action that can threaten the peace that we cherish so much in Lagos State.

“Therefore, I, Comrade Musiliu Ayinde Akinsanya, on behalf of the State Administrative Council, State Executive Council members and the entire union rank and file members of the National Union of Road Transport Workers, Lagos State Council with over 200 branches and zones hereby resolve to immediately withdraw our membership and operation from the National body of NURTW for peace to reign in Lagos State.”