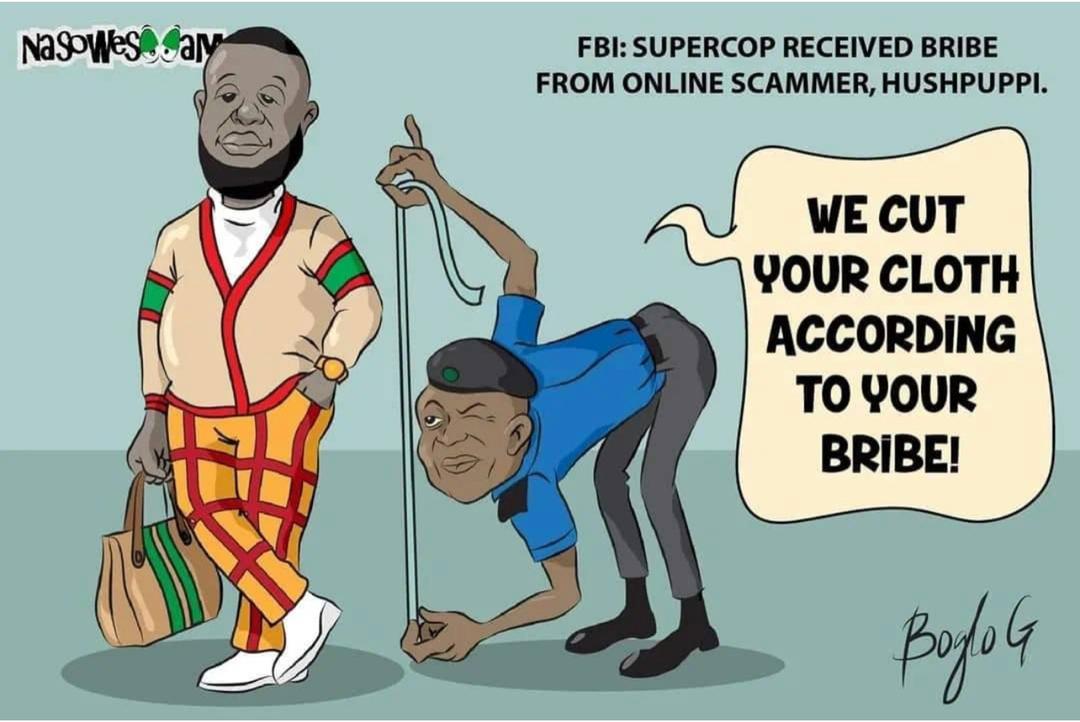 If they were television series, we would have by now watched several interesting episodes of what could have be titled ‘The Rise and Fall of Supercop Abba Kyari’.

But as they are opinions, we have nonetheless seen so many of them – from the very intelligent to the most ridiculous and to those you could clearly smell were written by people paid to do so.

The open unholy romance between St. Abba Kyari and the internet demon, Ramon Hushpuppi has made so many people rack their brains in wonder. At least if Kyari wanted to dine with the devil, he should have used an invisible spoon. But the taste of the pudding must have been so delicious that he had to sit down ‘well-well’ to use both hands to get the mossels of food into his mouth, not minding how soaked in oil his fingers would be, easily marking him out as a partaker of the unholy communion.

As we go on debating and talking about Abba Kyari’s fate, so many cops in Nigeria are falling for the same pudding and they are lapping up to the milk being offered by criminals and ordinary people, and as a result, they are being hushed from talking about some of the evil they are seeing being perpetrated by their ‘friends’.

The corruption in the Nigeria Police Force is a fault of majority of us. From the low ranking officer on the street who is bribed to help arrest an enemy to the one given ‘something ‘ to release a relative, we have all at one time or the other encouraged them to be puppies in our hands.

Domesticated puppies are unlike their counterparts in the wild. While those in the wild have to follow their mothers to hunt for food, domesticated puppies are fed with milk and meat at will and they are pampered. They appreciate this, that’s why they wag their tails whenever they see their benefactors. They lick their feet and even faces. They grow up loving their masters to the point of almost dying for them. The masters cannot be wrong.

Your adored puppies that have grown to big dogs will protect their masters from criminals but they won’t mind going with them to raid other people. That is loyalty. Whether the loyalty is sane or not, they don’t care. Loyalty is loyalty. You have hushed the puppy.

It is so easy to make our cops accessories to the crimes we commit when we pamper them with money and gifts. They will see evil, but they cannot say evil or arrest evil.

For instance, the moment the arrival of a new Commissioner of police is announced, cartons of money arrive in his hotel while his official residence is being renovated. By the time he moves into his new abode, gold wristwatches, beautifully embroidered babanriga and leather bags loaded with hard currencies are brougnt to welcome him. Within a month of his arrival, he’s already a rich man.

If he has served as commissioner of police in oil-rich states before, he is already used to money but he wants more. His children are in overseas schools and his wife is an iyalaje in her trade. They must continue to prosper.

Does he know those giving his these gifts? Of course. Some are politicians who need him to make things run smoothly in their businesses, whether personal or political. Some may just want to befriend him because how could they have reached that stage without knowing all those matter in the state.

So what happens when all the benefactors go against the law? The matter becomes something to be hushed and managed so that the ‘friend’ does not face the wrath of the law. Your dogs shouldn’t bite you, right? Right. Settled.

So from the top to the lowest in the police ranking, somebody is being hushed with gifts.

Do they have the willpower to refuse favours? Not really. Their friends and families see their positions not only as places of honour but of wealth. God help them to live only on salaries. Even the kabiyesis, obis or emirs of their towns won’t greet them again. Their fathers and mothers may cry that they have brought shame on them by being poor or not rich.

So what’s the way out? Serious reforms in the police force. Just like the rest of us, they want to grow financially if they are putting their necks out there for us. Salary structures must be made in such a way that even those intending to bribe them may feel too small to do so.

Codes must then be put in place to seriously sanction any police office caught hobnobbing with people of questionable character.

Their standards of living must not be above what they earn.

More than that, recruitment into the police force must be by passion and not by desperation to just get in. Family backgrounds should be checked, and during screening, those with values should be considered.

Until we get it right from the very beginning, our cops will continue to be like puppies and bring hushed by criminals and those with money everyday of their lives.

Alhaja Adeola Agoro (JP)*_ is a seasoned journalist and entrepreneur, write from Abuja!