The recent drama between Kpokpogri and Tonto kick-started after Actress shared a video of him twerking ecstatically while claiming that it depicted her current mood.

Kpokpogri reacted in a statement, claimed Tonto Dikeh was a husband and boyfriend snatcher as he urged her to pray to God for forgiveness.

Responding, Tonto fired back at Kpokprogri as she urged him to mention the names of any man she had snatched.

Few hours ago, The Actress posted a twerking video of Janemena and her Kpokpogri on Instagram.

She claimed a fan sent the video to her because the fan knew she was going to post it.

“Una Dey give me joy for the APP. The fan who sent this to me is EVUL cause I’m God you knew I was gonna post it” she captioned the video. 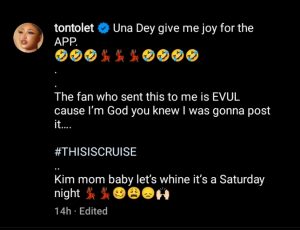