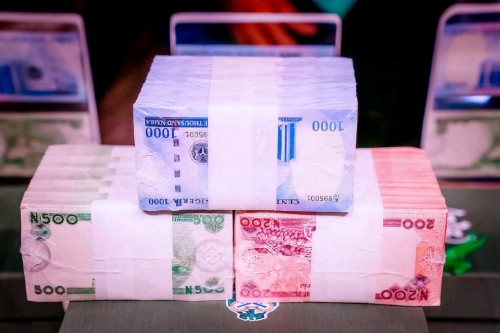 The Central Bank of Nigeria has imposed fresh cash withdrawal limits on individuals and organisations, which will become effective on January 9, 2023.

According to a memo issued by the CBN to banks on Tuesday, individuals will only be able to withdraw N100,000 per week (from over-the-counter, point-of-sale machines or automated teller machines), while organisations can access N500,000 per week.

The memo signed by the CBN’s Director of Banking Supervision, Haruna Mustafa, directed banks to load only N200 and lower denominations into their ATMs. This means Nigerians will only be able to withdraw N20,000 per day from ATMs when the directive becomes effective.

The memo read, “The maximum cash withdrawal over the counter by individuals and corporate organisations per week shall henceforth be N100,000 and N500,000 respectively. Withdrawals above these limits shall attract processing fees of 5 per and 10 per, respectively.

“Third-party cheques above N50,000 shall not be eligible for payment over the counter, while extant limits of N10,000,000 on clearing cheques still subsist.

However, there is an exemption that allows up to N5m for individuals and N10m for corporate organisations once a month with certain requirements.

The CBN warned banks that any bank that would aid and abet the circumvention of this policy will attract severe sanctions.

Following the new directive, the National President, Association of Mobile Money and Bank Agents of Nigeria, Victor Olojo, has said that point-of-sale operators would plan to protest as the policy was targeted at killing their source of livelihood.

Olojo said that the newly announced policy would have a negative impact on their business as it translated to the shutting down of PoS terminals.

He said, “This news is just breaking and a lot of PoS agents are already complaining bitterly. Some are calling for protests as this policy, which limits PoS transactions to N20,000, sends them out of business. Hence they have to return to their villages.”

Speaking on the impact of the new policy on individuals and the economy, the president said it would be really tough as Nigeria was still a cash-dominant society.

He said, “Nigerians should brace up, as this is a challenge that CBN is putting out to Nigerians to embrace technology. However, the difficulty would be felt as we still have a lot of transactions done with cash, especially those that are below the pyramid such as the market women and men who are petty traders, because this in essence means that once a bag of rice or flour is to be bought, which is above N20,000, it has to be via e-banking. Looking at it, how many of these people are technology-savvy?

“The CBN wants to achieve an agenda which is not exactly bad. However, a longer notice should have been given to those at the bottom of the pyramid. I believe that, eventually, the adoption would scale and people would have to get acquainted irrespective of the difficulty, embracing it in the long run.

“However, it is still very difficult because the technological infrastructure is still not there yet, and there are those who have had bad experiences with technology as well. The implication of this policy would slow down a lot and affect a lot of things, particularly those earning more than N20,000 daily.”

Olojo noted that his fears and concerns were that the policy was coming at a harsh period when the Nigerian economy was ill-prepared for it. He added that there should be an adequate alternative before any process would be scrapped.

Another operator who gave his name only as ‘Small’ said, “This will really affect PoS business, a situation where customers can’t withdraw more than N20,000 daily means those who withdraw more than that normally will be limited.”

The Deputy Managing Director of ABC Transport, Jude Nneji, however, lauded the project.

He said, “At least, it will limit some of these crimes. If somebody knows he can’t get cash from you, he won’t bother to attack you. If you also consider the cost of printing this money, you’ll want to use electronic means.”

When asked if this would not affect his transport business, he said, “No doubt, it’s going to encourage people to hoard funds but for people like us whose customers pay through electronic means, we don’t have a problem. However, we hope that government has good intentions too.”

The Chief Executive Officer, Rivers Link, Mr Obinna, said, “This will affect our business, some of us are businessmen and there may be things you want to buy that will be more than N20,000, and some of us may prefer cash, so it will surely affect businesses.”

“If other channels are well-organised, then it is good. However, every other thing is going to affect us because, as from December 15, 2022, most people will be skeptical about accepting old notes.

“Most people will not like to discard old naira notes with them because there is no point in taking away the one I have to the bank and find out the new naira notes are not yet available.

“How can you say I can’t access more than N100,000 in a week? What do I do with N100,000? So, it is going to have a serious effect on the local market. These people are selling on a daily basis at Ketu , Igboyi, Oyigbo market, most of them do not have PoS or ATM. So, it will affect the speed of transactions and movement of goods.

“Now, it is people with cash that will be able to buy goods. Because if I say I want to transfer and no one is taking the transfer from me, they will tell you they cannot accept that mode of payment because they have no bank account.

“Now, CBN is talking about N100, 000 a week, but how will that work when a bag of rice is N45,000? So, if I buy a bag of rice, won’t I buy something to eat? It is a very bad policy and will affect every small business owner because they won’t have money for transactional purposes.”

The President of the Bank Customers Association of Nigeria, Dr Uju Ogunbunka, said that the cashless policy’s intentions were understandable but the execution and timing were not right, stressing that these were areas where severe problems would emerge.

“From the cashless policy point of view, we should appreciate that, as much as possible, the government is trying to limit the use of cash for transactions, more so, now that they are redesigning the currency. And they may not have enough in print, so for it to go around, they have to find a way to limit us from using cash.

“The second thing is that the government wants to drive the use of online banking, which is good for our economy. Unfortunately, there have been so many complaints about failed transactions.

“At least, to the best of my knowledge, there is hardly any week without complaints in the banking hall. You will see people shouting with regard to transfer failures. Have we put enough structure to take care of some of these things? The answer is, we are yet to, we are making progress, yes, but we should give enough room and time for some of these things to play out rather than short-circuit the system.

“If all of us, including market women and men, have to go online today, can the infrastructure carry all of us through successfully? This question should be able to deal with some of these things.

“Some of us do not need too much cash to operate. For instance, if I go to the bank in a week and withdraw N100,000, what will I be spending that money on? I mean that should be enough to use for one week. If I can do other transactions online, why not? But it is not everybody that can do this, particularly those who are trading. Most of them still depend on people coming with cash and, then, they will carry the cash to the bank to pay in. This means there will still be a need for people to have cash; otherwise, what we are going to tell people is that you have to hold on till you have cash to do your transaction if you cannot do online banking.

“And the aforementioned can stall businesses. For example, the market woman going to buy food stuffs needs physical cash. Where will she do online banking with that? And can N20,000 today solve that problem for one week for a family? That’s not possible, so there might be a need for a rethink unless you are targeting people in the towns.

“Even in towns, I do not see the effectiveness of this policy let alone in the rural environs. It is a good policy, but we should streamline to see what is possible in the kind of economy we operate, especially with inflation at double- digit. The practical situation on ground does not support this policy.”

A former President of the Association of National Accountants of Nigeria, Dr Sam Nzekwe, said that the CBN, in limiting withdrawals, was trying to reduce cash in circulation and drive financial inclusion, which was not a bad thing to do.

Nzekwe also said that with more money in the banks, the institutions would be able to provide financial interventions to those who needed it to boost the economy.

“With more money in banks, the banks can use the money for their financial intervention role in the economy,” he said,

He, however, urged the banks to ensure that Nigerians could trust their systems enough to keep their money there.

He noted the issue of people losing money in their bank accounts to cyber-attacks and fraudsters could discourage them from keeping money in banks.

Nzekwe urged the banks to address this issue and build more trust with Nigerians to drive financial inclusion and security in the country.