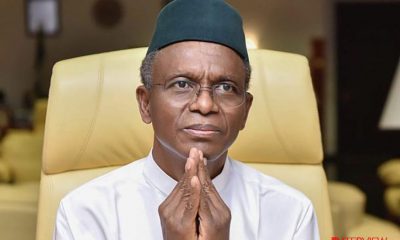 The Governor of Kaduna State, Nasir El-Rufai have come under backlash over the remark he made about a planned ‘two million march’ for the Labor Party presidential candidate, Peter Obi, in his state.
El-Rufai had on Monday mocked Peter Obi supporters, saying that he may not get more than 200 people to join the exercise.

The governor also made a slur on Igbos after making reference to unrests affecting traders in the South East region, who are forced to observe the weekly sit-at-home order declared in the region by the secessionist group, Indigenous People of Biafra (IPOB), as a means to pressure the Federal Government to release its leader, Nnamdi Kanu, who is facing treasonable felony and terrorism charges.

“I hope you get Two Hundred persons on the streets,” El-Rufai said in a tweet, adding that Obi supporters could include “those ‘imports’ that can’t open their shops on Mondays, and came on overnight bus last night!!”

Reacting to the remark, some supporters of Obi slammed the governor, adding that he feels threatened by the support the former governor is getting from the youths.

@FS_Yusuf_: “That you have to respond to this, is a clear indication that you feel super threatened and unsettled. This isn’t you disproving or dismissing a fact, this is you yielding to the trepidation that it is PO-ssible. “Import” is a strategy of APC that we won’t be employing. Rest”

@KelvinIkenga: “This is a state governor in Nigeria being openly tribalistic, & lacking all sense of decorum & finesse. Peter Obi’s only crime is being Igbo. Next time when Igbos tell u they’re hated, believe them. How can this openly tribalistic fellow be fair to all citizens in his state?”

@arizzto1011: “Look at what a governor is writing? Very insensitive. Your ha8 for Igbos will d3stroy you and all that you hold dear. Why are you afraid? Yet you want to come to the east to campaign right?”

@VictorIsrael_: “I don’t know how y’all see this but this sounds like a threat. If anything happens to any Nigerian in Kaduna who comes to stand in solidarity with Peter Obi, El Rufai should be held responsible. Bl00d sucking demon.”

@AfamDeluxo: “A pinch of salt Governor that has lost his state to terrorists being a bigot on Twitter. What else have you achieved in your existence apart from birthing simpleton that are all over Twitter looking for women to rape. Na why you brief like semicolon. Connard!”