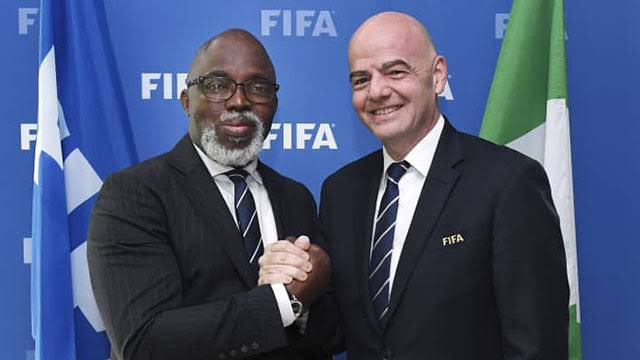 In what seems to be an identical scenario with Kenyan and Zimbabwean football woes, Nigerian Football Federation (NFF) is preparing to ride the roughshod of government intervention, in a bid to buy themselves extra time in office by postponing the elective assembly slated for September 20th. The problems with the current office begun when their social-contract with the wider public expired, after the Super Eagles failed to qualify for the FIFA World Cup, one that current Nigeria Football Federation (NFF) President and FIFA Council Member once proclaimed as their “birth right” earlier in their qualifier campaign.

The ensuing circumstances compelled Amaju Pinnick to announce that he wasn’t in the running for a third term as FA President, citing pressure and strain on his family and personal life, a statement received with cautious optimism by his opponents.

That phantom appointment didn’t sway collective sentiment of the restless football fraternity, with protests breaking out in Abuja calling for the immediate resignation, arrest and prosecution of the NFF Executive Committee on the 21st of April. For Pinnick, Gianni Infantino has been a functional prop in his efforts to project his regional and international assignments as part of a greater cause for mankind, and he successfully aligned his personal ambitions with those of his country’s pursuit for more clout in the regional front, with a recurring statement on all his speeches that “Nigeria is Africa’s most populous country”.

But a few months after that turn of events, its become evident that Amaju Pinnick has no intention of leaving office, as he’s undermined NFF statutes by creating an artificial impasse so as to buy himself extra time in office by suspending the constitution and undermining the electoral process in an identical manoeuvre of his fellow FIFA Council member Isha Johansen, who through the patronage of FIFA, managed to stay in office for a whopping five (5) years without a general assembly at the Sierra Leone Football Association.

The stalemate prompted the Head of State Muhammad Buhari to issue instructions through Sports Minister Sunday Dare on 17th June, demanding that timelines for electoral processes be respected, inclusion of disgruntled splinter groups hitherto suspended from football activity and statutory amendments to the NFF constitution.

In response to the letter, Amaju Pinnick sponsored a scathing editorial on leading publication “The Punch” directly attacking the Head of State Muhammad Buhari and Sports Minister Sunday Dare for undue influence, dismissing them as people with a limited, uninformed and toxic agenda. Pinnick later denied allegations of sponsoring the editorial on the official NFF website.