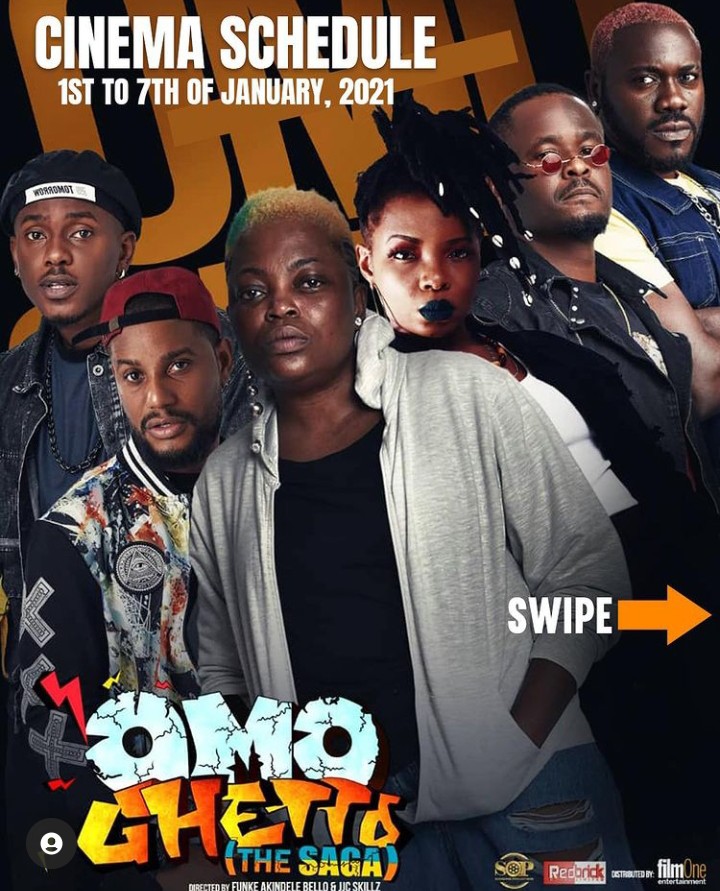 Omo Ghetto (The Saga) produced by Funke Akindele-Bello is easily one of the most talked about films out of Nigeria in 2020; a year snowed under by the novel Covid-19 where cinemas were shut down the most of the year.

Released December 25, to serenade cinema goers during the yuletide season, the movie according to Cinema Exhibition Association of Nigeria, CEAN, in its first weekend of release had raked in N98million naira, and by the end of its first week rounds on the silver screen across the country, the movie is reported to have grossed N146,953,550. Impressive numbers! I must commend, considering the economic downturn that the country currently grapples with, coupled with the gloom of Covid-19 second wave upsurge.

The original Omo Ghetto story was a 2010 DVD release, produced by Funke Akindele and directed by Abiodun Olanrewaju.
Next Read: Oloture: Mo Abudu Reacts to Copyright Infringement Allegations
However, this sequel, a completely glossy upgrade from the original story was directed by JJC Skillz, Akindele’s husband, making it his feature length directorial debut.

Unlike the original story that had a niche Yoruba audience, hence Yoruba being the major language of the movie, the sequel was made in English Language for a broader spectrum of viewership. 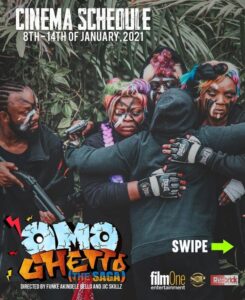 As the saying goes, you can only take the child from the gutter, but cannot take the gutter from the child; this was the case of Shalewa, one of the twin girls nicknamed Lefty.

Although the benevolent Mrs. Benson (Tina Mba) had adopted Lefty’s twin sister Ayomide as an infant, Lefty only joined them in the upper-class area of the society as an adult.

Old habits, like they say die hard, Lefty becomes like fish out of water, as it becomes a herculean task for her to fit into the aristocratic lifestyle in Mrs. Benson’s home on the Island. Her lack of finesse and tomboyish nature makes it impossible for her to date guys on the Island, that she had to stick to her ghetto lover Femi Stone, a leader of a cybercrime syndicate.

Lefty also belongs to a girl’s cult called the Askamaya Bee, comprising Busty (Eniola Badmus), Nikky (Bimbo Thomas) and Chummy Choco (Chioma Akpotha). This makes her constantly find her lure back to the streets of Askamaya. 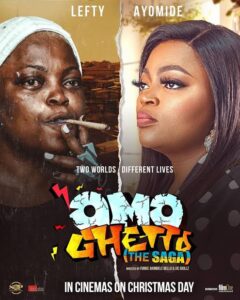 The movie opens with a chase sequence inside Askamaya ghetto. Two police officers are chasing a young boy carrying a bag across his neck. Ordinarily, viewers’ curiosity is aroused, as to what business such a kid could have with the police that they would not back down. One of the officers even had to scale a fence after the boy.

Eventually, the boy falls by the feet of an imposing figure, the camera tilts up slowly to reveal Lefty (Funke Akindele). Lefty gives the boy cover inside her flamboyant roofless beetle car. Lefty would later find out that the boy was on errand to pick up cannabis for Mogambo (Yemi Alade), a dreadful ringleader of an Askamaya ghetto cult. Lefty defies her, by destroying the substance.

Mogambo comes after Lefty, not even her gang members Nikky, Busty and Chummy Choco could save her from the claws of Mogambo, thanks to the timely intervention of her boyfriend Femi Stones (Deyemi Okanlawon) a kingpin of a cybercrime syndicate.

In a series of intriguing plots and dramatic twists, Lefty’s loyalty to Femi Stone would be tested when she gets arrested for a crime committed by her boyfriend, yet she refused to turn him in. Unknown to her, she was only a collateral damage for Femi Stones inordinate ambition. And her twin sister Ayomide gets trapped in the mix of the drama. This leads to an intriguing climax.

There is a lot to appreciate this beautiful work of art for. The production design Omo Ghetto the sage is very impressive, I love the way Ghetto life was portrayed with flamboyance, and color. Everyone was happy, this is a departure from the usual gloom and tragedy for which most ghetto stories were told. It is an unusual way to tell tales from the slum. It just makes you want to love life in the Ghetto. I’d not be surprised if more stories with a similar theme of Ghetto gangsterism make the big screen in the new year.

The casting was a fine blend of actors and musicians from across the board. It was beautiful seeing Michael Zubby, Adebayo Salami, AY, Yemi Alade, Slim Case, Bukky Thomas, Sani Danja, Timini Egbusan, in the same movie.

Funke Akindele through this movie once again stamps her foot as an undisputed role interpreter with numerous characters in her bank. Having to Play a twin (Salewa and Ayomide) is tedious enough, but delivering both characters with such finesse and believable mannerism sets her apart.

Another worthy note point from the movie was how the climax was left open and ended with arrest, with Lefty telling Femi Stones the fight had only just begun. This leaves room for another sequel or even a serial from the same story. That is applaudable. The film score is good too.

I love the use of slang too, most of them are very original. I also liked that most of the lines were weaved in a call and response manner.

I love that the story was set in an imaginary neighborhood named Askamaya, they didn’t need to set the story in real life areas popular for thuggery.

The police too, I love the fact that their uniform and badge is different from that of the Nigerian Police Force, even though viewers are aware that the police subplot was a satire of the rot within our police. Kudos to Blossom Chukwujekwu for an awesome delivery of the role of the corrupt officer.

In a bid to give off slang in the ghetto scenes, some of the lines appeared too prolonged, leading to a few moments of boredom for viewers. An example was the scene where there was an altercation between Lefty and her gang with a group of boys over dominance of a territory where a mast was about to be mounted.

Amen Estate appeared to be mentioned too many unnecessary times, as if the viewers could have missed initial mentions and they wanted it to sink.

I think there was a bit of untidiness in the execution of some character arcs, it didn’t make sense to me that Mogambo and her gang were totally ignored for the rest of the story after the first act. I’d have wanted to see Mogambo unite with Femi Stones to give Lefty and her girls a more lethal fight at the end. You know what they say about the enemy of my enemy becoming my friend. The climax seems easily reaching for me.

The flashback scene where Baba Onibaba finds out about the where Shalewa was taken to after kidnap, and Lefty eavesdropping on them, that appears too easy, and feels like the writer not putting effort into that part of the story.

These low points regardless, Omo Ghetto, The Saga was an ambitious work of art, and delightfully so.