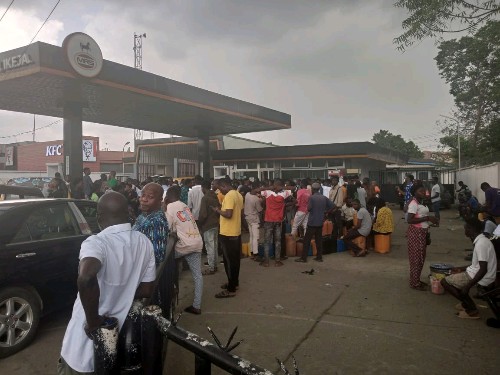 Queues for petrol spread to several filling stations in Lagos even as black marketers sold the product for N350 a litre.

Several sellers told Applesbite on Monday that they sold the product between N320 and N350 per litre.

“We used to sell the product for N250 before now. But as the product has increased at fuel stations, we had no choice but to increase our price to N350 a litre,” a seller in Satellite Town said.

Queues were seen across some filling stations on Monday, while some others shut down services in the state, a situation motorists have had to put up with for about one week.

On the other hand, the MRS filling station at Ojota was closed due to lack of adequate supply, according to a petrol attendant.

“The petrol station is closed because the supply we got is not enough. However, later in the day, we may still open later. We are still expecting more supplies later,” he said.

Across the state, transport fares have also increased due to petrol scarcity.

“I had to queue under the sun for 12 minutes to board a minibus. Just imagine. Yesterday, I also had to queue to get petrol. It is tiring.”

“We don’t have fuel. If there is fuel, then we have something to sell. The little that’s available, we are buying at N205. When you add transport, that’s about N213 before you can add your profit. That’s the truth,” Osatuyi said.

“NNPC said the fuel is available, but we don’t see it. If we are able to see the fuel, that’s the only way we can confirm that the product is available. Let’s wait and see for the next few days.”