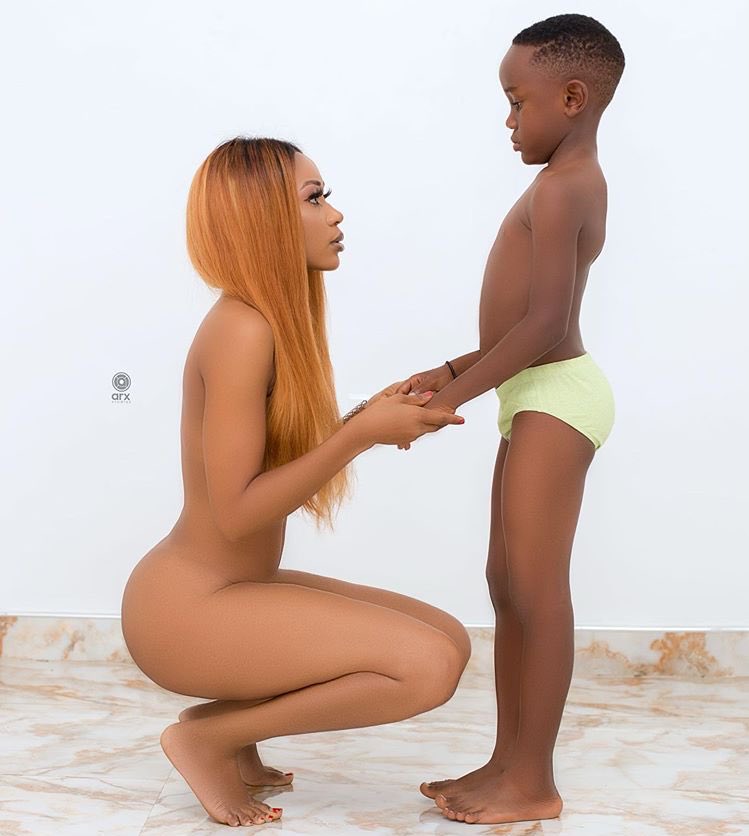 Okay, so Ghanian actress Akuapem Poloo to celebrate the birthday of her seven year old son, decided the occasion was a perfect plan for her to break the internet and go viral, as she poses nude with her boy.

The actress’ son was dressed only in his underpants, while Akuapem Poloo bares it all.

Akuapem Poloo in a post on Instagram says that she was naked because that was how she was when giving birth to him.

“You see how you looking at me always remember that I love you????‍❤️‍???? I’m naked in front of you because this is how naked I was giving birth to you, so in case you find me naked lying somewhere don’t pass by me but rather see me as your mom who brought you to life,” she wrote.

However, the post has attracted some criticisms from followers, fans and other social media users.

That vile photo of Akuapem Polo and the boy should be off the internet.Off off off.Report any account that posts it. No teenager or child must see it.Off off off!

Posted by Gary Al-Smith – Journalist on Tuesday, June 30, 2020
Some users said the photo is in bad taste adding that they are surprised Akuapem Poloo sees nothing wrong with the photo.

Per our Children’s Act 1998 (ACT 560), Akuapem Poloo has abused the rights of her child by exposing him to “moral danger…

Posted by Esinam Osei on Tuesday, June 30, 2020
And to everyone sharing the photo, please remember the child is a minor. Please protect him from further ridicule. At best, please don’t share that photo furtherThank you

Posted by Esinam Osei on Tuesday, June 30, 2020
Others wrote that the actress has done nothing wrong because the little boy is her son.

I’m I the only one who think there is nothing wrong with Akuapem Poloo’s picture with the son.????

Well, so many people are talking about akuapem_poloo nakedness in front of her son, but to me this isn’t wrong at all. Why do I say so? This is a harmless photo considering the message it contains
It just depicts… https://t.co/lrkvjsJgOV

Akuapem poloo ne gyemii.. Aden aa I was naked when I gave birth to you, kwasiakwa
So the child had sopota(jockstrap) on when you born am.. Wagyemi-awou

— big 4teen (@ReenzelRich) June 30, 2020
Akuapem Poloo is misbehaving this early morning and some so called “local celebrities” are under her post and kissing ass as usual! ❤️❤️❤️❤️ oh nice. Wei y3 nice? Nobody has a problem posing a picture with your son celebrating him. Let’s not condone nkwasiasem in this town. Tchew

— Miwasty (@NanaTheBoss2) June 30, 2020
Imagine Shatta Wale, Stonebwoy or Sarkodie w/ their daughters being the characters in Akuapem Poloo’s photo. The so called femists will pull their mouths like borla bird go come talk a whole lot of bs …

this isn’t the first time I’ve seen a celebrity pose nude with their son though. An incident like this happened in the US some years back, but it’s still weird

Who are we to judge though..
Ɔbaatan asem deɛ yɛnka no pii

— ????OGYAM???? (@KwabenaGyam_) June 30, 2020
#AkuapemPoloo koraa sii d3n??
Ahhhhhhh..
I saw this photoshoot of hers trending this morning.
And trust me.. I feel too ashamed to share..
Whatttt #wendyshay
See your girl
I love her
But this one dierrrrr

— BarristerMaameAbenaPokuaa (@barristerabena_) June 30, 2020
Going naked in front of your son just to get attention on social media is a shameless thing Akuapem Poloo is doing. At least you could have taken your son to the orphanage to celebrate his birthday with the kids????‍♀️

— Nungua Zayn Malik???????? (@WahidHansen) June 30, 2020
This thing Akuapem Poloo do if ibi guy wey do am ah like by now girls from nowhere start dey tweet “Justice for the kid”, “Men are trashed” and a whole lot of nkwasiasem.

— Ivan Arthur???? (@Mrbelgium1) June 30, 2020
If the child was still a baby and she did this kinda shoot with him…I’d see nothing wrong with it but now he’s growing; could be 9 or 10yrs ….couldn’t she have given him a decent normal photoshoot?…Akuapem Poloo dier oh norrrr. Cardi B sef no go do this.????

— Enarya???????? (@iamowusuaa) June 30, 2020
Akuapem Poloo will fool saaa and later come and apologize say she’s done with fooling. But after some time boom and she’s back to fooling again sigh????.

Secondly what kind of “innovative” photographer will take that up as an idea and make that a shoot.

— Kojo Komment???????????? (@benbenaqua) June 30, 2020
Akuapem Poloo was thinking she was sending a great msg of motherhood, but rather potentially raising a child who might be traumatized for a long time. 7 years is a dangerous age for parenting, creating the path of ur child. Akuapem is choosing a dangerous road for her boy ????????

— Saada ???????? ???? (@daddys_girlT) June 30, 2020
Clearly it’s the west you’re copying – meanwhile the people you keep mentioning anytime you’re attacked in Riri and Kim K never do this for free. They earn something when they appear like this as magazine covers or what have you. But here are you doing it for clout Akuapem Poloo

— Atopa Gangster???????? (@Atopa_Gangster) June 30, 2020
Where are the feminist? Hope they have seen what Akuapem Poloo is doing? Are they happy? Is she promoting the idea of a “virtuous woman” ? Must guys still respect her like this? We have a culture ohh…OK! U continue copying the “west” na mo ngyimii saaa..we are watching u..

— Son Of Mourinho (@senyonino) June 30, 2020
We’ve got societal misfits but that of Akuapem Poloo is past that level, she’ll do anything for attention. It’s madness at this level.

— Datty Don (@Dattydon) June 30, 2020
Akuapem Poloo paaaa does she have people around her who advise her? Cos this madness we dey see am play play den e get critical

so her son was wearing pant when she gave birth to him anaa??

— Dr. Hausakoko (@sir_virgi69) June 30, 2020
I no that no man will do what Akuapem Poloo did. But when a man does that, I expect those people with feminist ideas that they don’t even understand to keep their mouths shut just like what they’re doing now.