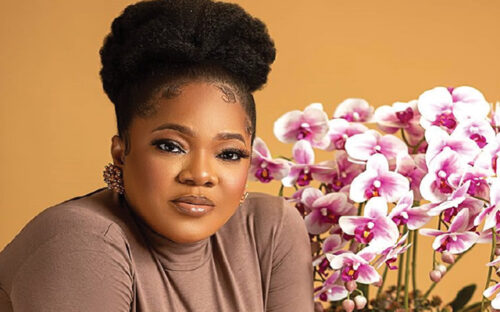 Award-winning Nollywood actress and producer, Toyin Abraham, has revealed that she recently lost a pregnancy.

The actress opened up during an interview on Sunday night on Channels Television’s Rubbin minds with Ebuka Obi-Uchendu.

She also said people usually ask her when she will have another baby despite having a son and a stepdaughter with her husband, Kola Ajeyemi, adding that when the time is right she will conceive and have another child.

Abraham, who lamented how people body shame her by calling her “fat” said she does not allow the negative comments and remarks to get to her. She said she would rather block people who insult her about her body adding that most people make passive comments without actually knowing what others go through in real life.

Abraham said, “Things happen and I get so bloated sometimes and people start saying, ‘you’re too fat, look at your husband he’s young, but look at you’ but they don’t understand.

“Guess what I am used to it already because if you let all these things get to you, you will just die of depression. Once I see your comments and if I’m not ok with it, I just block the person.”

On the loss of her pregnancy, she said, “They always want you to have a child, obviously I have a stepdaughter and I have a son but they keep asking when will you have another child.

“It’s not always easy but when the time is right the pregnancy will stay and you will see it.”

When asked if she wants to have more children, Abraham said, “Yes I want to have more kids. I was actually pregnant but I lost it. It’s fine though. But when it happened I cried, I cried a lot because I just want to have one or two more kids and I’m done, but things happen.”