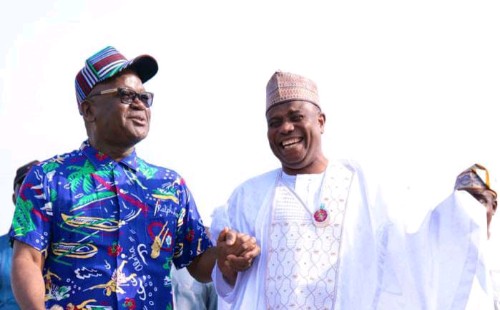 Samuel Ortom, governor of Benue, says the leadership of the Peoples Democratic Party (PDP) failed to take advantage of the crisis in the party to foster unity.

He said this on Sunday while speaking with journalists after a meeting with Aminu Tambuwal, governor of Sokoto.

Over the past months, five PDP governors — Ortom, Nyesom Wike of Rivers, Okezie Ikpeazu of Abia, Seyi Makinde of Oyo, and Ifeanyi Ugwuanyi of Enugu — and their allies have been at the forefront of calls for the resignation of Iyorchia Ayu as the party’s chairman in the interest of “equity and fairness”.

PDP Crisis: I Met With Wike Five Times, No Issue On My Part – Atiku

However, Ayu had insisted that he will not resign.

Amid the crisis, Ortom and his allies have excluded themselves from the PDP presidential campaign council.

Speaking on Sunday, Ortom said though he has discussed with Tambuwal, reaching out to other aggrieved members would be meaningful.

“We have discussed quite a number of issues, including the division in the PDP and the G-5, of which I am a member. He is principally here to see how we can team up and work together as a party,” he said.

“I have told him we are members of the PDP and like I have always said, the leadership of this party have failed to take advantage of the challenges of the party and make the party stronger right from when we held our national convention.

“Instead of the party deploying its internal conflict resolution mechanism to look at the grievances that arose as a result of the primaries, no matter how stupid they were, they have failed to do this. Rather it is arrogance and a nonchalant attitude.

“Nobody has cared to reach out to us even when we voiced out that things were not going on well.

“For me, I commend him (Tambuwal) for taking this step to visit me and we have discussed my opinion on how I think this matter can be resolved and I believe that as a leader and as DG of the campaign, he will do the needful because I am not alone.

“Talking to me alone will not solve the problem, but reaching out to others will be more meaningful. I also believe he will also try to do the needful to put the party together as it is.”