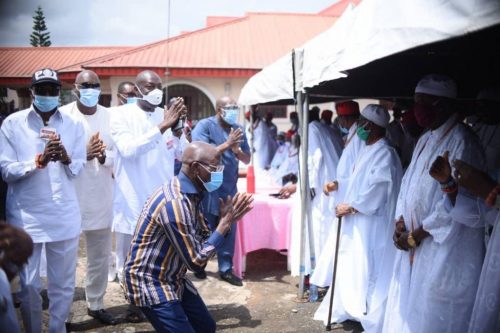 Adams Oshiomhole, former national chairman of the All Progressives Congress (APC), says he made a mistake by supporting Godwin Obaseki to become Edo state governor in 2016.

Speaking on Sunday while addressing members of the ruling party in Benin, the state capital, Oshiomhole said he has come to apologize for his mistakes.

The former national chairman of the party had a running battle with his successor which led to the defection of Obaseki from the APC to the PDP after he was disqualified from the APC primary over a “defective” certificate.

“Obaseki is MOU (Memoranda of Understanding) governor, but Pastor Osagie Ize-Iyamu is a man of God, who will ensure good governance in Edo State from November 12 this year,” Oshiomhole said.

“I have made my honest mistakes. Only God is perfect. I am now 68 years old. I have come to apologize for the mistake of supporting Obaseki in 2016. I am in Edo State to repair my mistakes.

“Obaseki has abused the trust of Edo people. With our permanent voter cards, we shall punish Obaseki on September 19. Ize-Iyamu will not repeat the mistakes of Obaseki. Ize-Iyamu will take Edo State to the next level.

“Obaseki pretended for almost eight years, while he did not believe in what I was doing as the governor.

“In 2007, Ize-Iyamu stepped down for me. In 2012, he was the Director-General of my re-election campaign organization and we won in all the 18 local government areas of Edo. I will work for the election of Ize-Iyamu.”

Related tags : ‘I Sold A Bad Product To Edo In 2016 Please Forgive Me’ — Oshiomhole Kneels Down To Apologize To Edo Elders