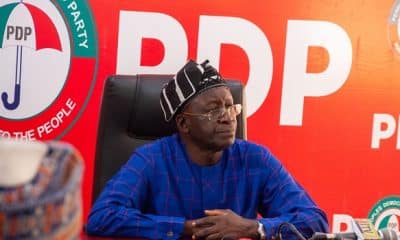 The National Chairman of the Peoples Democratic Party (PDP), Senator Iyorchia Ayu, has been asked to give an accurate account of the party’s income.
A PDP support group, the Youth Advocate for Equity, said this in a statement on Friday while reacting to reports that four PDP National Working Committee (NWC) members returned money paid into their accounts.

Applesbite reports that some PDP NWC members announced the return of the sum of N93.6 million paid to their bank accounts by the embattled National Chairman.

The PDP chieftains, in different statements, claimed that they received the notification of the payment from their bank accounts without any description or purpose.

Reacting, the PDP denied reports that the amounts returned by six members of the NWC members were paid as bribes, stating that funds were for their housing allowance.

Haaland Will Not Stay At Man City For More Than Five Years, Says Father

In a statement on Friday by its spokesman, Sodiq Olaiya, the group advised Ayu to emulate the six PDP NWC members who refunded millions of naira to the party’s coffers.

The group refuted the party’s claims that the money went through due process before being paid into their accounts.

The statement reads: “Ayu, through the national publicity secretary of the party, has argued that the unfounded allowance went through the due process of the party in line with the conditions of service and entitlement of staff and principal officers of the party.

“We found this claim to be outright false and to save face in order to conceal the real intention of disbursing the money. The backdoor arrangement through which Ayu approved the money is criminal and a ploy to cover up his track. If truly the NWC members are entitled to housing allowance, why delay it till this time when they have already spent more than nine months in office?

“Defending the indefensible will not be expedient for Ayu and his allies at this time, but the honourable thing for him and his co-travellers is to retrace their steps and give an accurate account of the PDP’s funds.”