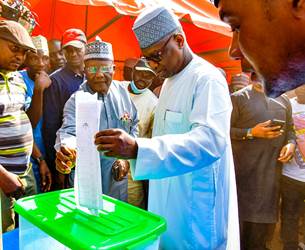 Niger state governor, Abubakar Sani-Bello has said that strengthening the electoral process at the local government level will boost the country’s democracy.

He disclosed this shortly after casting his vote for the local government election at the Alkali Mustapha Polling, Kontagora on Saturday.

According to him, “if democracy must be practised, it should be done rightly without depriving the people their right to choose their leaders.

“It is very unfair when you deprive people at the local government levels their right to choose their leaders; we must support this to become a democratic country,” he said.

Sani-Bello added that it was unfortunate that the major opposition party in the state boycotted the local government poll because the court process did not favour them.

“They went to the court and unfortunately the process did not go in their favour; they decided on their own to boycott the election,” he said.

He applauded the election process saying that it was peaceful at his ward and expressed optimism that it would be same in all parts of the state.

House of Representative member representing Wushishi, Kontagora, Mariga and Mashegu Federal Constituency, Abdullahi Idris Garba who also cast his vote at the Dan Hausa A Ward, Kontagora, commended the electoral process and the electorate coming out to exercise their franchise.

Garba urged the voters to cast their votes for the candidates of their choice and remain peaceful during and after the election.