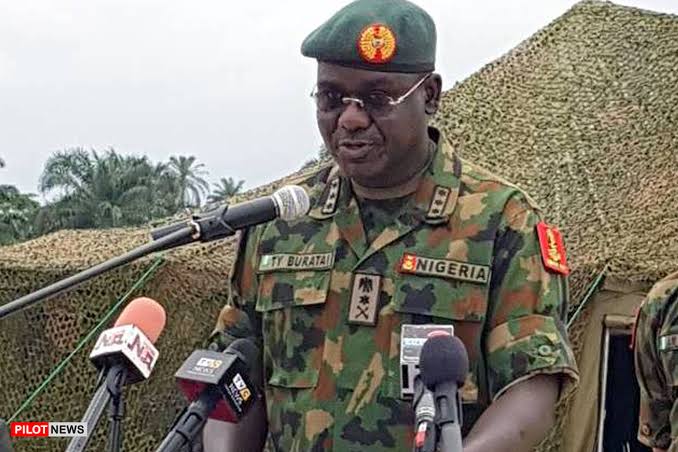 No fewer than 37 Generals and five Colonels have been approved for redployment by the Chief of Army Staff, Lt.-Gen. Tukur Buratai to different formations and units, in what has been described as efforts to rekindle the spirit of professionalism in Nigerian Army.

The Acting Director, Army Public Relations, Col. Sagir Musa, disclosed this in a statement on Tuesday in Abuja.

Musa said that the posting which was approved by Buratai was a routine/normal exercise intended to reinvigorate the system for greater professional effectiveness and efficiency.

The major highlights of the postings include – the postings and appointments of Maj.-Gen. Lucky Irabor from Defence Headquarters Department of Training and Operations to Training and Doctrine Command (TRADOC), Minna as Commander.

Also, Maj.-Gen. AM Dikko was moved from Administrative Staff College of Nigerian Badagry to NA Training Centre Kontagora as Commander, while Maj.-Gen. US Yakubu moves from Corps of Artillery Kontagora to Army Headquarters Abuja (AHQ) as Chief of Administration (Army).

Maj.-Gen. BO Sawyer moves from AHQ Department of Policy and Plans to NA Armour School Bauchi as Commandant, Maj.-Gen. IO Uzamere was redeployed from NA College of Logistics Lagos to AHQ as Chief of Logistics (Army).

Others according to Musa are Maj.-Gen. CO Ude from NA Resource Centre Abuja to DHQ as Chief of Defence Training and Operations, while Maj -Gen HR Momoh moves from Defence Space Administration Abuja to AHQ as Deputy Chief of Policy and Plans/ Director Special Duties, Policy and Plans.

Others appointments according to Army spokesperson are, Col. B Sarki from Defence Intelligence College to 6 Military Intelligence Brigade as Acting Commander, while Col. KO Ogunsoya moves from DHQ to Headquarters Directorate of Army Public Relations as Chief of Staff.

According Musa, all the postings and appointments take effect from July 20, 2020.

“While wishing all the officers well in their respective appointments, the Chief of Army Staff enjoins them to take their new responsibilities/appointments seriously and discharge all duties professionally with utmost loyalty to the Nation and the Service,” he said.

Next Read: {Document Attached}: Between Ibrahim Magu and I – Prophet Emmanuel Omale