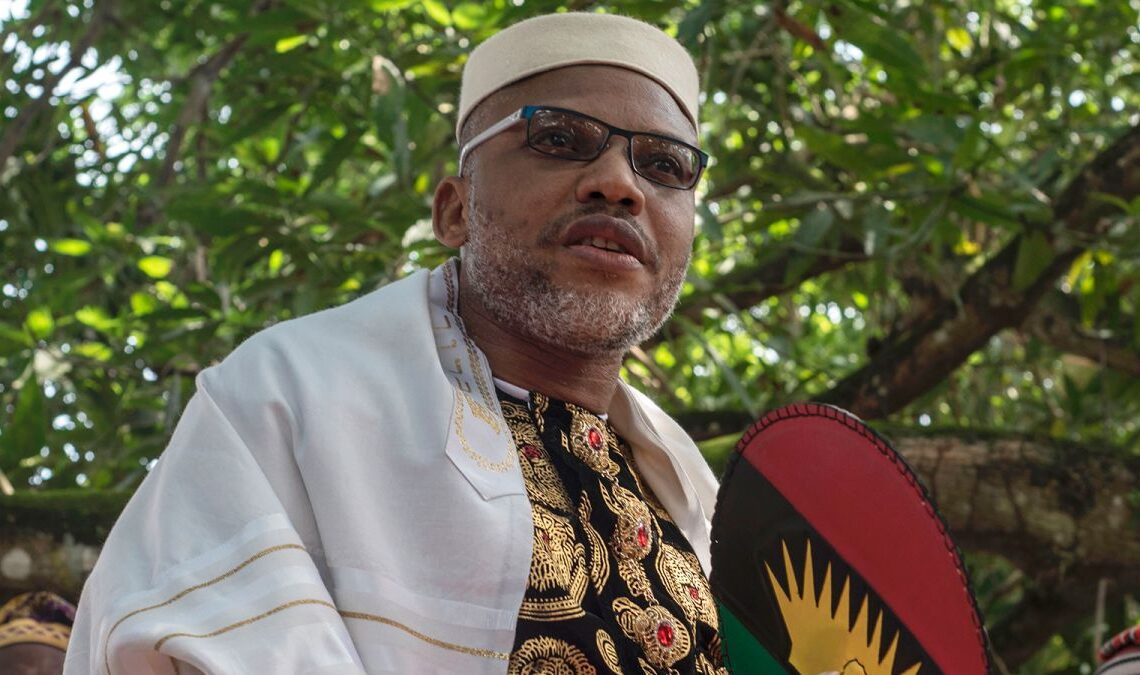 The Indigenous People of Biafra, on Saturday, lambasted a Coalition of Northern Groups for saying its leader, Nnamdi Kanu, should not be released.

This was as the IPOB stressed that United Nations’ order to the Federal Government that Kanu should be released unconditionally superseded an order of a court in the country.

The CNGs had, on Friday, rejected the call by the United Nations for the unconditional release of the detained leader of the Indigenous People of Biafra, Nnamdi Kanu.

But in a statement signed and issued on Saturday by its Director of Media and Publicity, Emma Powerful, the IPOB said the CNGs exhibited the height of laxity and ignorance for attacking and warning the UN over the order.

The statement further noted that the CNGs’ position on Kanu’s continual incarceration and the UN order was an indication that it was an undemocratic and lawless group.

The statement read, “The attention of the global movement and noble family of the Indigenous People of Biafra, under the command and leadership of Mazi Nnamdi Kanu, has been drawn to the laughable, disgraceful and unguarded statements credited to the inconsequential mushroom group called Northern Coalition Group (NCG) on the UN Working Group on Human Rights and Arbitrary Detention’s recent opinion for the unconditional release of Mazi Nnamdi Kanu.

“This ignoramus faceless Northern group shows their idiocy and absolute ignorance by attacking and warning United Nations on their order to release IPOB leader and prisoners of conscience, Mazi Nnamdi Kanu, unconditionally and compensate him adequately for illegal abduction and extraordinary rendition from Kenya to Nigeria over a year ago.

“The statement credited to this Fulani group towards UN opinion betrays the Fulani mindset, and how undemocratic and lawless the Fulani people are. It is not far from the truth that the Fulani Government in Nigeria sponsored this faceless Northern group to attack the UN decisions. They want to test the reactions of the International Community.

“The world must understand that Fulani people are parasites in Nigeria who are bent on hijacking indigenous people’s ancestral lands and resources in Nigeria but IPOB won’t allow them. They have hijacked strategic positions in the Nigerian government, have deliberately and tactically weakened the Nigerian military while empowering the Fulani terrorists to take over the Nigerian government structure and then seize the ancestral lands of all the Indigenous People in the Zoo called Nigeria.

“It is very obvious that the recent increase and boldness of attacks by these Fulani terrorists, especially in Abuja, will convince every doubting Thomas that these terrorists are state sponsored and their agenda is to Islamize Nigeria and forcefully take over the Federal Government of Nigeria. The government in Nigeria is a bunch of Fulani Cabals and Agendists called presidency who have bankrupt Nigeria while importing and sponsoring terrorists to take over the Nigerian government.

“But their plans have failed and will continue to fail. If others will accept terrorists government in power, IPOB members and Biafrans will never succumb to their intimidations and they will regret why they indulged themselves in that act in the first place.

“The recent shameless statement from Fulani attacking the United Nations shows that they are demented and don’t know that United Nations’ opinion is not the same as the Nigerian Court Orders they flout at will. Fulani government and her people, think they can use terrorism and threat to get people succumb to their demand. They understand that threat and terrorism don’t shake IPOB.

“Very soon, the Fulani government and her people will understand what they have done to themselves. Attacking United Nations opinion shows how clueless, uninformed and inconsequential they are.

“Fulani backwardness, ranting and undemocratic nature cannot change the decision of UN. The time to bury Nigeria finally is fast approaching, that is why they are ranting against world organization without minding the consequences. More so, the terror times of the Fulani in Nigeria is about to be extinguished and we shall see them no more in the nearest future.

“This faceless NCG group thinks that they have the temerity to challenge United Nations’ opinion on its core mandate in sanctioning tyrants and Human Rights abusers in the world. Fulani government thinks that the world are ignorant of what they are doing in Nigeria, creating different kinds of terror groups to terrorize and rampage the public in the hope that every one will succumb to their intimidating tactics and yield to their Fulanisation agenda. How very pitiably wrong they are. They have indeed miscalculated this time around.

“When did faceless groups like NCG become Nigerian government spokespersons? For the Nigerian government to have kept mute since the order from United Nations means they knew what they have entered into. They don’t want to say anything that will go contrary to the UN’s decisions as a government. Instead this motley of uninformed Northern elements came out to publicise their ignorance and cluelessness to the world. They don’t know what United Nations stands for in the Committee of Nations.

“Biafrans and other trapped Nations in this contraption should go home and thank God Almighty Chukwu Okike Abiama who is in Heaven for giving them a group called IPOB and Mazi Nnamdi Kanu. Posterity will bear us witness the heavy price we paid in opening the eyes of the great Nations trapped in this British enterprises experiment called Nigeria.”