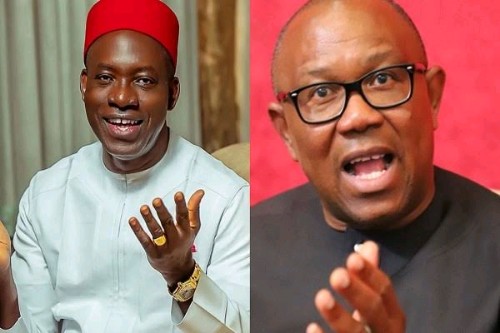 The association is different from Ohanaeze Ndigbo, the group headed by George Obiozor.

In an article published on Monday, Soludo had said Obi knows that “he can’t and won’t win” the presidential election.

Reacting in a statement issued on Tuesday, Okechukwu Isiguzoro, secretary-general of the association, said the group has taken Soludo begore “two famous divinities and deities” over his comment.

The group said it is “unreasonable public behaviour” for Soludo to “cast aspersions” on Obi who is his kinsman and presidential candidate from the south-east.

“Ohanaeze Ndigbo Worldwide has advised Anambra State Governor, Professor Chukwuma Soludo to concentrate on the current crisis in Anambra State and APGA and halt casting innuendo and aspersions on the person of Mr Peter Obi who is not in the same political party nor fighting the Anambra State Government,” the statement reads.

“Governor Soludo transgressed in choosing to revolt against the Labour Party Presidential candidate, Mr Peter Obi, who is his brother and predecessor.

“Ndigbo has dragged Governor Chukwuma Soludo to the two famous divinities and deities (Chokoleze in Mbaise and ubiniukpabi in Arochuku) for his unreasonable public behavior.

“The Governor behaves like he was fighting Peter Obi over his future ambition to be President in 2031.

“Our direct response to Governor Soludo’s verbal diarrhoea against Peter Obi is that Governor Soludo’s actions are ridiculous, unreasonable and premature. There was no locus for the Governor’s outburst, and the Igbo sanctions against Soludo to face Igbo deities will serve as a deterrent to southeast politicians who have been hired by enemies of Ndigbo and Nigerians to derail Obi’s Presidency in 2023.

“Governor Soludo exposed and indicted himself of treachery when he discredited APGA and Labour Party’s Presidential candidates as not viable alternatives to win the 2023 elections.”

The group said Nigerians should “disregard” Soludo’s comment about Obi and Philip Umeadi, presidential candidate of the All Progressives Grand Alliance (APGA).

“He had confirmed that he is the number one enemy of the New Nigeria and was hired by an unpopular Presidential candidate who is looking for Igbo politicians to pull down Obi’s popularity ahead of 2023,” the group added.