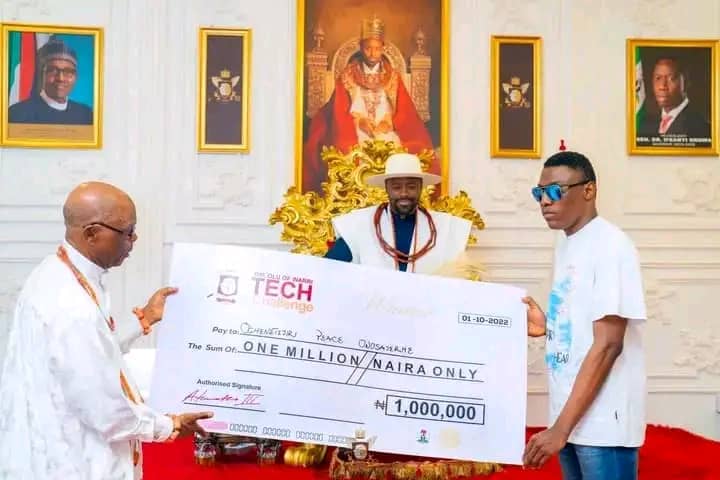 The programme was organised by the Olu of Warri, Ogiame Atuwatse 111.

The 23-year-old winner is developing a work that would significantly close the gap between the sighted and the blind, who will now have access to more literature. 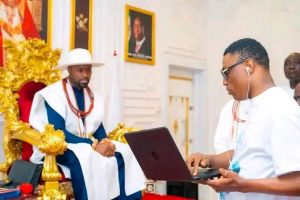 The virtually impaired Onosajerhe
was consequently awarded a cheque of One Million Naira for risen far and above the precincts of disability, to proffering solutions that the world seeks.

The award ceremony was held at the Olu Palace (Aghofen) in Warri South Local Government Area of Delta.

Addressing the gathering on Saturday, Ogiame Atuwatse 111 assured that he would continued to support the processes that would see Warri emerging as a shinning light among her contemporaries.

“The Warri Tech challenge will advance into its next phase where selected participants will go through an incubation period commencing next year.

“We are set to build a Warri that will attract the attention of the world to the talents and tenacious spirit of our young people,” Ogiame said.

The royal father noted that
traditional institutions just as their names suggest were conservative custodians of so much of the material and immaterial components of our total wellbeing.

He said that changes within them seldom happen and where they do, they go on to reverberate in every facet of our lives.

According to him, the thrust of these changes in most instances, should be to address challenges in line with societal trends.

Ogiame said that some of the changes may be small but their impact could be as much as a paradigm shift.

“The Olu of Warri Tech Challenge is another uncommon way at which the revered monarch has decided to tickle the creative prowess of His subjects,” he said.

Participants in the Tech Challenge were drawn from an online application of 600 persons, 180 met the criteria where Onosajerhe
eventually emerged winner.