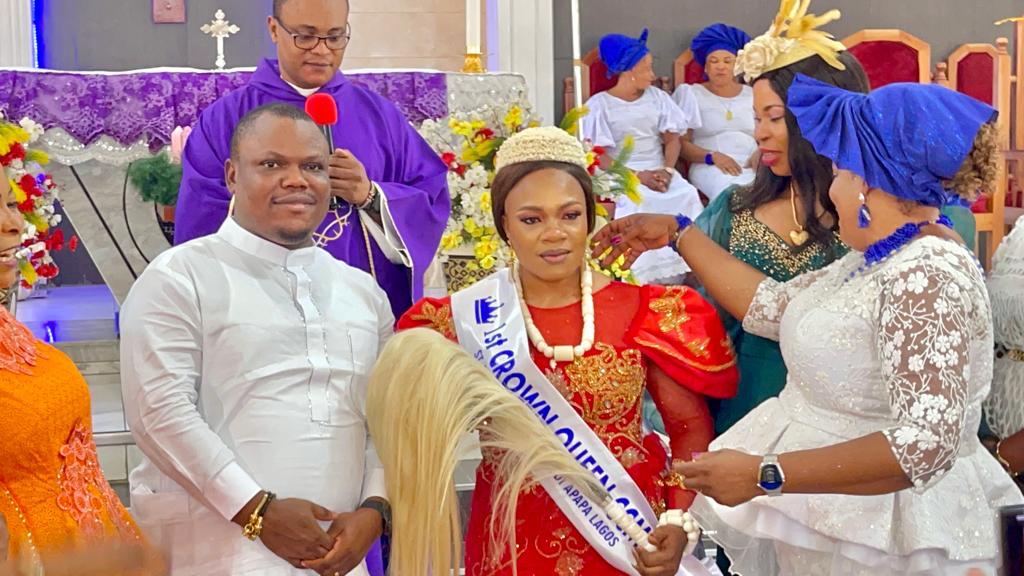 The event took place today during the 9:30am mass at St. Margreth’s Catholic Church officiated by the parish priest, Rev. Fr. Okpala Joseph.

The beautiful and elegant wife of Hon. Francis Barthlomew Chima aka OmoBarca was officially crowned the First Queen of St. Margreth’s parish by the CCM-Confraternity of Christian Mothers.

Before her coronation, Rev. Fr. Okpala Joseph who also crowned the new Queen addressed the congregation on the duties and responsibilities of the new Queen.

He also mentioned that this is the first of its kind in the parish and also prayed that God Almighty continues to bless the organizers of this prestigious event. He also brought to the fore the qualities that endeared the CCM to choose Lolo Francis Esther Chibuife as their First Crown Queen; her humility despite her husband’s very high ranking position in the society, her motherly nature; caring for all that comes her way as she would her children, her godliness; always happy to be in the presence of God while in the fore front supporting God’s work and her Queenly carriage. 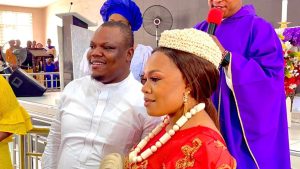 Hon. Francis Barthlomew Chima aka OmoBarca while addressing the congregation thanked God for a day like this. He appreciated the organizers for honoring his Queen with such a prestigious title. Furthermore, in his usual way of showing appreciation he donated 10pcs of Air Conditioner and also donated the sum of three million naira (#3,000,000) to the Church.

Recall that two weeks ago, Hon. Francis Barthlomew Chima aka OmoBarca was a special guest of honour at the Church harvest of St. Margreth’s Catholic Church where he gave a total of two million, six hundred thousand naira (#2,600,000), same day two weeks ago OmoBarca and his entourage were also at the harvest celebration of St. Mary’s Catholic Church Oregie, St. Matthew Catholic Church, Amukoko, St. Joseph’s Catholic Chaplaincy Navy Barracks, Mobil Road and St. Peters Anglican Church Tolu where he generously donated several millions of naira which at the time of this report have all been redeemed.

What else can we say but call him, the anointed one of Ajeromi Ifelodun Federal Constituency. “He or she who has decided to go to battle with the son of Grace has chosen an endless and aimless Race”

With Hon. Francis Barthlomew Chima aka OmoBarca, Ajeromi Ifelodun Federal Constituency is safe, secure and set for progress and development.

Once again we say congratulations to the Queen on your coronation as the First Crown Queen of St. Margreth’s Catholic Church Olodi Apapa Lagos. May God continue to bless and prosper you, Amen.