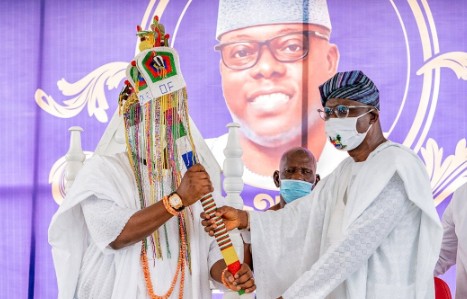 There has been no lost love between between children of the late Oniru of Iruland, Oba Idowu Abiodun; and his successor, Oba Omogbolahan Lawal. And the crisis between them has degenerated into violent confrontations, Apple’s Bite International Magazine Investigates

The crisis from our sources, reveals was over the control of some properties in highbrow Oniru, Eti Osa local government area of Lagos State.

According to PUNCH, following the installation of Lawal as the 15th Oniru last month, the children of the late king continued to maintain control of some of the properties worth billions of naira.

The new king in a statement by his lawyer, Chief Bolaji Ayorinde (SAN), subsequently asked all banks housing funds belonging to the royal family to immediately freeze all the accounts of the family.

The new monarch also called on all tenants and lessees to stop transacting with any individual.

Trouble was said to have started early on Sunday, July 5, when Oba Lawal ordered some palace officials to post public notices on some of the properties under contention.

Some thugs believed to be loyal to one of the sons of the late Oniru, Tijani, was said to have led his own men to beat up those posting the notices on the properties.

A resident said, “On Sunday morning, the new Oniru’s boys went about posting public notices on some of the properties but TJ (Tijani) got his boys to beat them up and chase them away. Later in the day, as TJ was making his way into Millennium Estate, the boys regrouped and beat him up.”

In a short video clip that was uploaded on social media, the palace guards who are clad in black shirts, slap him in the face as he flees into Millennium Estate.

It was learnt that after the fracas, some sons of the late Oniru stormed the palace to register their grievances but they were kicked out by the security guards.

When contacted on the telephone, the Police Public Relations Officer, Bala Elkana, said he was unaware of the fracas but promised to find out and provide information.

Attempts to speak with Oba Lawal’s lawyer, Chief Ayorinde, also proved abortive as the senior advocate did not respond to calls.

A representative of the children of the late monarch, Demola Oniru, who is alleged to be an active participant in the crisis, also did not respond to calls while a text message had not yet been responded to as of 10.50 am.

Governor Babajide Sanwo-Olu had on June 7, 2020, installed Oba Lawal as Oniru amid protests from prominent members of the royal family.

The Oniru monarchy is one of the wealthiest in the South-West with massive investments in real estate worth billions of naira.

The monarchy also owns British International School, Lekki, one of the most expensive academic institutions in the state.

One of the ruling houses in Iruland, Victoria Island, Lagos, the Omowumi Abisogun Oniru chieftaincy family, has rejected Oba Lawal, as the new Oniru of Iruland.

The family claimed that Lawal was neither a member of their family nor qualified to be the Oniru.

They called on the Federal Government to prevail on the Lagos State Government to reverse Lawal’s installation as oba and choose one of them as the king of Iruland.

Next Read: FG to Shut Third Mainland Bridge for 6 months