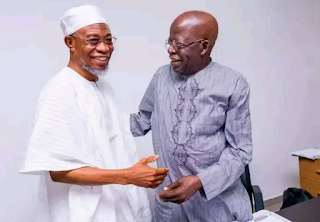 APC National leader, Asiwaju Bola Tinubu and his political ally, and warring protege, a former governor of Osun State and Minister for Interior, Rauf Aregbesola are presently at the palace of Alaafin of Oyo, HRM Oba Lamidi Adeyemi in Oyo town, Oyo State, sources in the know have revealed to Apples Bite Magazine.

The party stalwarts and their loyalists have been at loggerhead over the control of APC state structure in Osun state where Aregbesola held sway as governor for 8years, with Adegboyega Oyetola, the incumbent, touted to be Tinubu’s brother, operating behind the scenes in Osun State politics for several years, before he vied and was elected to take over from Aregbesola who felt slighted because he desires someone else for the governorship position.

Governor Oyetola was Aregbesola’s Chief Of Staff while he was governor.

Things took a dramatic turn few weeks ago when the Minister during an official visit to Osun state declared that APC is divided into 2 in the state.He said, “for those that doesn’t know, they should know today. APC has divided into two here. The recognized Chairman of Rauf Adesoji Aregbesola’s APC is AbduRasaq Salinsile.

“Everybody is doing his or her own. When it is time, we will renegotiate, we will rearrange everything.

“The caucus that produced our faction is called ‘The Osun Progressives’ (TOP) chaired by Elder Lowo Adebiyi. Those that said they didn’t know where I belong to, they should open there ears and listen. I belong to the TOP wholeheartedly.”

The state party primary election to pick the candidate to represent the party in the July 2022 guber election took place yesterday with the incumbent governor casting a soar away victory over Aregbesola’s candidate the former Secretary to the State Government, Alhaji Moshood Adeoti,who Aregbesola insisted will emerge as next governor of Osun state.

This is as he said the party is back in the hands of true progressives who will work assiduously to win in the July 16 governorship election and openly denounced relationship with incumbent Governor, Adegboyega Oyetola.

Supporters of Gov Oyetola and by extension Tinubu’s loyalists took to the streets with a mock coffin signaling the death of Aregbesola’s political dynasty in Osun state.

Attempts made in the past to reconcile the 2 south west politicians met with brick-wall till the meeting holding at the Alaafin palace now. It is hoped that the meeting will bring an end to the bitter war going on in the two camps.

Details of the ongoing meeting at the palace will be revealed soon.

Suggested Read: IGP Alkali Baba And The Mockery Of Omokri