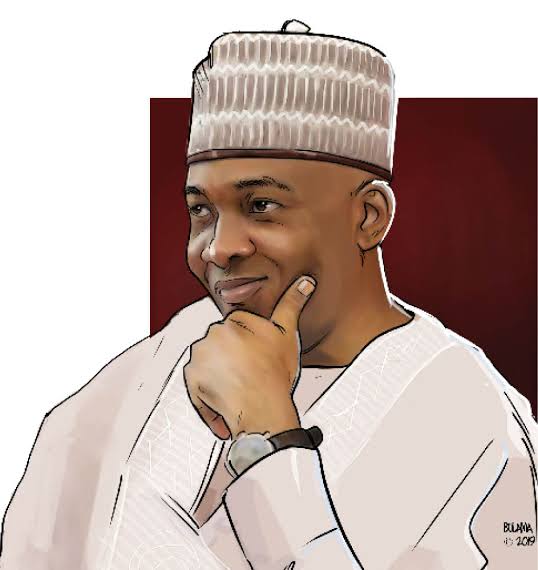 Those that have been following the build-up to the party’s primaries can testify that the four aspirants have better political structures across the country among the 15 aspirants and it is reflecting in their consultations from both Northern and Southern part of the country.

With the decision of the party to discard its tradition of zoning, many pundits are quick to predict that the race for the ticket will be a four-cornered fight between Atiku, Wike, Saraki and Tambuwal. They argue that these four aspirants have done the most work towards canvassing for support of party leaders and delegates in past months. 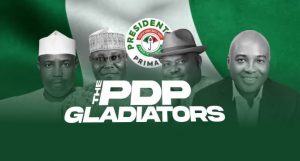 In the piece below, we analyze how Saraki will emerge victorious ahead of other aspirants during this weekend’s PDP Presidential Primary in Abuja.

Saraki at the moment has some endorsement already tucked in his belt, beginning from his endorsement as one of the Northern consensus aspirants by a group of northern leaders led by former Military President, Ibrahim Babangida. He has also been endorsed by some of the PDP chapters in the North Central.

Saraki’s deep pocket is also an added advantage as far as the Presidential Primaries is concerned.

While extrapolations based on the actual number of delegates might have become nearly impossible following the refusal of the president, Muhammadu Buhari, to sign the re-amended Electoral Act, the current state of play, has given an even clearer picture of where the states each stand in terms of delegates voting, ultimately.

To emerge as candidate, the aspirants have to garner the most votes from delegates from the various states of the federation. So how are the aspirants faring in their quest for votes?

A Southeast state under the leadership of Dr. Okezie Ikpeazu, would not mind a candidate from the southern zone, in this case Peter Obi. But with the governor recently openly declaring support for Wike. Votes here would be shared between the Rivers State Governor, Wike, and Obi, although Wike stands a better chance with Ikpeazu.

Governor Ahmadu Umaru Fintiri, is for Atiku and being his home state, the Adamawa delegates will naturally vote Atiku 100 per cent, both on personal recognition and the governor’s influence.

The Akwa Ibom State Governor, Udom Emmanuel, is also in the race for the PDP presidential ticket and since governors are in natural control of their delegates, there’s no debating where the delegates in Akwa Ibom would vote. But, it would be votes wasted at the end of the day.

As their governor for eight years, the period of which was believed to have accounted for their best, at least, as the narrative has remained.

Anambra State would have been considered a 100 per cent deal for Obi, factoring the home zone advantage, but it is not. While he is going to have an edge, he is definitely sharing the delegates with Atiku, at least, some percentage yanked off his stake.

Governor Bala Mohammed of Bauch State, is also a presidential hopeful, but might have been caught between returning to office as governor and trying his luck at the presidential primary. But in the event he chooses to back any of his co-aspirants and enters into any form of negotiations, Mohammed might direct the Bauchi delegates to vote for Saraki. Until then, Bauchi is standing with its governor.

Bayelsa is one of the fishing ponds for all the aspirants and they are all likely to battle for votes here, depending on how well they each stand. On the one hand, former President Goodluck Jonathan’s influence is presumed could help Wike wield some influence, but his bitter relationship with former governor Seriake Dickson, on the other hand, could also work against him, since the incumbent, Diri Diouye, is Dickson’s governor. Yet, Diouye too is friend to both Saraki and Tambuwal, given the National Assembly connection. Thus, Saraki is likely to get 60 per cent, while the three others share the remaining 40. But a vote for Tambuwal is considered a waste.

Although Governor Samuel Ortom of the state would rather a southern president, naturally, he is a friend of Saraki and coming from North Central, there’s zone advantage for the former Kwara governor. Yet, Benue would be shared among Saraki, Wike and the Akwa Ibom State Governor, Udom Emmanuel, because of the Gabriel Suswam factor. Suswam is for Udom.

Borno is North East and that’s Atiku’s home zone. But he does not currently boast any visible influence in the state, therefore, it might be a battleground state for the four frontline aspirants. Saraki will, however, have an edge, but because of the governorship candidate, Mohammed Imam, who is a factor and ally of Wike, the Rivers’ governor is hopeful of some votes here too.

Cross River State is gunning for three people: Saraki, Atiku and Wike. With former governor Liyel Imoke’s overwhelming influence, Saraki and Atiku are sure to get about 40 per cent each of the votes while Wike, leveraging the influence of the governorship candidate, Sandy Onor, would get the remaining 20 per cent.

Until lately, Delta State was already conceded to Atiku, but with the simmering crisis between Governor Ifeanyi Okowa and one of his predecessors and strongman of the state’s politics, James Ibori, the tide has changed. Delta is now for Atiku and Saraki in equal proportion.

Ebonyi is definitely rooting for its own, former Senate President, Anyim Pius Anyim. It’s a no contest zone and another waste of votes as the former senate president is unlikely to make any impact.

The scenarios in Edo come in two folds. First, the case over the leadership of the party in the state is in court. However, if the choice of delegates would be based on the list with Governor Godwin Obaseki, then, the Edo votes are for Saraki. But if the list by Dan Orbih is the accepted one, then, Wike is taking Edo 100 per cent.

Ekiti State is technically in the hands of former governor Ayodele Fashion, who in turn, is loyal to Wike, the man believed to have bought him the presidential forms. Except for the likelihood that there could be some deviant delegates, who might rail against Fayose, Ekiti might have signed up for Wike 80 per cent, conservatively.

Governor Ifeanyi Ugwuanyi of Enugu State is unrepentantly an advocate of southern president, but is stuck between Wike and Obi. However, from the current reading of the equation, it is more of Obi than Wike.

Gombe, a North East state, is standing between Atiku and Saraki. One, for zone advantage and the other for friendship and influence leveraging. Looks like a 55/45 sharing pattern.

Imo is another state that offers Wike and Tambuwal near-equal chances of vote-grabbing. It would be fight to the finish between them. It’s a 50/50 game, because of their connections, which is between Emeka Ihedioha, Tambuwal’s deputy as speaker of the House of Representatives and Sam Anyanwu, the party’s secretary and Wike’s ally.

At the last count, Jigawa State looks good for Saraki, based on the current political extrapolations in the state. The state, which is in the hands of former governor Sule Lamido, ordinarily, has been marked for Tambuwal, but current realities have shown that voting the Sokoto State governor could be a sheer waste of the votes. Saraki is now being considered and therefore, sharing the votes with Tambuwal, with a slight edge.

The North West sentiment is very active and prevalent here and as such, Kaduna is going the way of Atiku.

The soul of Kano PDP is still in the hands of a former governor of the state, Rabiu Kwankwaso, who has yet to forgive both Atiku and Tambuwal. Kano has kept its votes to be shared between Saraki and Wike.

Katsina State is firmly in the hands of a former governor of the state, Ibrahim Shema, who is with Saraki. Thus, Saraki is cleaning out the state with some 80 per cent votes, while Wike is picking some crumbs, because of the influence of Senator Yakubu Lado, who is working for him.

Kebbi is voting Saraki 100 per cent. There’s no debating it.

Although Kogi State is largely for Saraki, given the zone advantage, it would be shared ultimately by the four of them at different percentages.

Kwara is not in contention. Home-zone advantage for Saraki is 100 per cent. It’s a no contest state.

Lagos State is going to provide the whole four a level playing field, however, with Saraki and Atiku, getting upper hands and Wike coming a distant third. Lagos is not looking the way of Obi at all.

Niger State has long signed for Saraki, not only because there’s zone advantage, but also because the generals in the state see the former Kwara governor as the best choice for Nigeria, and a good opportunity for their zone. Wike, however, is sure to ‘steal’ some votes.

Ogun State is doing a bipartisan deal with Saraki and Atiku, and giving the chunk of its votes to Saraki, who stands shoulder higher than Atiku.

Ondo is giving its votes to Saraki and the state is sympathetic to him because that’s where his mum hails from.

In Osun, Saraki has an amazing relationship with the PDP candidate in the state, Ademola Adeleke, who has the delegates in his pockets. Osun is for Saraki.

Oyo State Governor, Seyi Makinde, is though for a southern president, he is also a friend of Wike and sometimes, defers to him. But he also has sentiments for Saraki. Thus, while Oyo may vote Wike considerably, Saraki stands to share some parts of the votes, although paltry.

Plateau State is North Central and Saraki is by all means possible leveraging the zone advantage. Plateau is for Saraki, with Wike sharing some of the votes.

Rivers is one hundred per cent for the owner of the state. Wike will take his state, even though it would not change the overall result.

Governor Aminu Tambuwal of Sokoto State, is a presidential hopeful and will definitely take his state. Sokoto is, however, marked a waste of votes. Tambuwal stands no chance in the race.

Taraba, a North East state, has always been in the bag for Atiku and that has not changed till date. Taraba will vote Atiku, overwhelmingly.

Yobe State is waiting to share its votes between Atiku and Saraki. This is likely to turn out a 50/50 run.

Unlike Yobe, Zamfara will vote en mass for Saraki, because of the influence and unwavering support of General Aliyu Gusau, who also represents the face of the generals in the politics of the party.

Delegates in the Federal Capital Territory (FCT) are rooting for Saraki, Wike and Mohammed. While they want Saraki because he lives amongst them, and a regular face they see; Wike will get some votes because of his relationship with Senator Philip Adudah, representing the FCT, while Mohammed still wields some influence as a former FCT minister.

In the final analysis, the PDP primary appears to be Saraki’s to lose, with Wike, Atiku and Obi, coming behind him in that order. Everything appears set for Saraki to clinch the party’s ticket, including the odds playing him to victory.

Related tags : Bukola Saraki PDP Presidential Primary: An Exposé of How Delegates Would Vote to Bukola Saraki's Advantage over Others