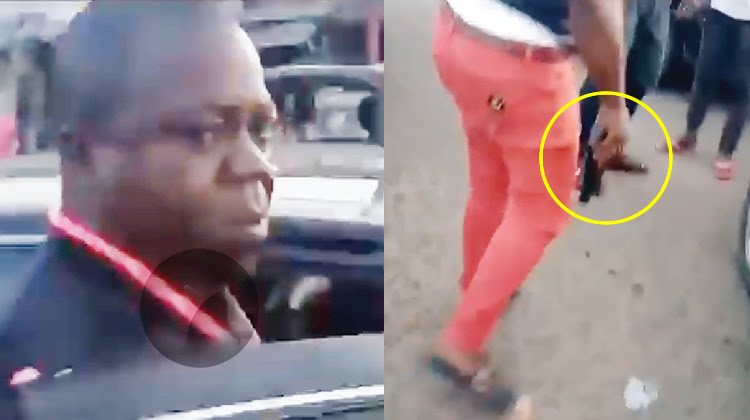 Inspector Yemi Ojumoola of the Nigerian Police Force has been arrested and detained for threatening members of the public with his service pistol, Apple’s Bite Int’l Magazine has learnt.

The Lagos State Police Public Relations Officer, Bala Elkana, speaking with news men on Tuesday, said that the state Commissioner of Police, Hakeem Odumosu, ordered that the inspector should face an orderly room trial, where his fate would be decided.

Ojumoola was caught on video engaging a motorist in an argument over traffic issues in Ibadan, Oyo State.

The motorist’s wife, however, challenged Ojumoola for bringing out his gun, wondering if he wanted to shoot her husband.

She dared him to shoot as the cop smashed the phone with which she was filming the incident.

Ojumoola later told our correspondent that he only wanted to scare the motorist and had no intention of using the gun.

He noted that the pistol was in its holster, adding that for the 28 years he had been in the police, he had never misbehaved.

Findings by our correspondent showed that Ojumoola was attached to the Raiders’ Unit of the State Criminal Investigation and Intelligence Department, Panti, Yaba.

Elkana said the command had commenced investigation into the matter.

“The CP has ordered his (Ojumoola) arrest and detention. He will be tried in an orderly room trial. The result of the trial will be made public,” he stated.

Next Read: I’ve Cried. Lord Knows” Gideon Okeke Reveals How Someone In The Industry Threatened His Acting Career 7 Years Ago