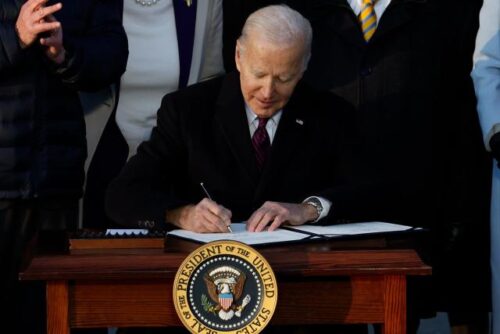 Biden held an event at the White House South Lawn with lawmakers and Cabinet members as the Respect for Marriage Act becomes law.

“Today is a good day,” Biden said as he took the podium after Vice President Kamala Harris. “A day America takes a vital step toward equality, for liberty and justice, not just for some, but for everyone. Toward creating a nation where decency, dignity, and love are recognized, honored, and protected.”

“We’re here today to celebrate their courage and everyone who made the day possible,” the president continued. “Courage that led to progress we’ve seen over the decades, progress that gives us hope that every generation will continue on our journey toward a more perfect union.”

The ceremony included Grammy winners Sam Smith and Cyndi Lauper. Smith, who announced they were non-binary in 2019, as they performed their hit song “Stay With Me” followed by Lauper singing “True Colors.”

Appearing in the White House briefing room ahead of her performance, Lauper told reporters, “We can rest easy tonight because our families are validated.”

“And because now we’re allowed to love who we love, which sounds odd to say. But Americans can now love who we love and bless Joe Biden and all the people that worked on this for allowing people not to worry and their children not to worry about their future,” Lauper said. Lauper founded the True Colors Fund, a nonprofit that educates people on LGBTQ issues and helps to end homelessness for LGBTQ youth.

Notable guests attending the signing ceremony, according to a White House official, included Club Q founder Matthew Haynes and two survivors of the shooting that happened just last month at the Colorado Springs LGBTQ nightclub. Other attendees included a survivor of the 2016 Pulse nightclub shooting that killed 49 people and plaintiffs and counselors from the Obergefell and Loving Supreme Court cases.

The historic marriage bill passed with bipartisan support in both chambers of Congress after months of negotiation. The House voted last week 258-169 to send the bill to Biden’s desk after the Senate passed it 61-36. A minority of Republicans joined Democrats in both votes.