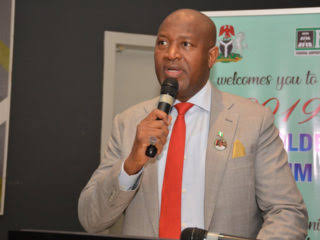 Since it was unveiled three years ago1 in London, the Federal Government has relived hope of the new national carrier with a funding offer above $250 million.

The Ministry of Aviation, in a memo, disclosed that the private sector would avail the fund, in line with the Public-Private Partnership (PPP) design for the ‘Nigeria Air’.

Next Read: Video: Indians Discard Idols For Not Protecting Them From COVID-19

The Federal Government on July 18, 2018, unveiled the name and logo of the proposed carrier at the Farnborough International Public Air show in London, United Kingdom (UK) ahead of the planned initial take-off on December 24 of that year. The lack of budgetary provision and criticism by the public forced the Minister of Aviation, Hadi Sirika, to “temporarily” ditch the December 2018 roll-out plan.

The national carrier is to replace the defunct Nigeria Airways that ceased operations in 2003. The replacement was designed as a PPP project with the Federal Government likely to own as much as 10 per cent stake.

The equity was earlier backed by N47 billion in the 2019 budget to help the airline take off after it reached the procurement stage in early 2019. The carrier was also listed in both the 2020 budget and the recent N27 billion aviation intervention fund proposed by the government in the aftermath of the COVID-19 pandemic.

In an update on where the aviation road map currently stands, the ministry stated that the national carrier would soon come upstream.

“The establishment of a national carrier is germane for the country not only in flying the flag of Nigeria high in the global air travel industry but also to stimulate activities in the industry and to create employment opportunities.

“We believe in what we are doing, we are not doing it off the top of our heads. We have done our studies; we believe it is doable,” the memo read in part.

Secretary-General of the Aviation Round Table Initiative (ASRTI), Group Captain John Ojikutu (rtd), said the government should give more explanation on their investment and that of the private investors.

“How many aircraft will it ($250 million) buy? Is the FG’s investment a part of the $250 million and how much is the FG investing?”

Aviation Consultant, Chris Aligbe, earlier said he expected that Nigeria Air would have taken off much in advance, even before the COVID-19 induced economic crisis.

Aligbe, however, insisted that Nigerian aviation needed a formidable carrier in the status of a national carrier to go farther than any private carrier could do.

He said despite the paucity of global investors, the airline project was an opportunity for investors that would be ready to take the risk.

“I believe that the national carrier is still possible. But with the pandemic, it means that we have to start reviewing the project plan to align with the new realities. I’m aware that a lot of airlines are doing away with the 747 four-engine aircraft, except for the A380s that some airlines still use. It means that we too have to start small. Where there was a plan for 20 wide-bodied aircraft before, we can start with about five single-aisle aircraft of not more than 200 passengers. It will enable the operation for about two years before the market normalizes.

“Again, instead of having technical partners with equity, we can start on the level of partnership arrangement with a formidable airline with an option of equity. That was how Kenya Airways operated with KLM. We can do that too, and review after about two years of operation; considering about 30 per cent of the equity. For me, there are more opportunities with this pandemic as a lot of fairly new aircraft are all over the place for buyers and at cheaper rates.

“I believe we can float the national carrier, and have an airport concession and aircraft leasing company before the end of next year. However, if we do not have the national carrier during Buhari’s administration, then we may never have it again,” Aligbe said.