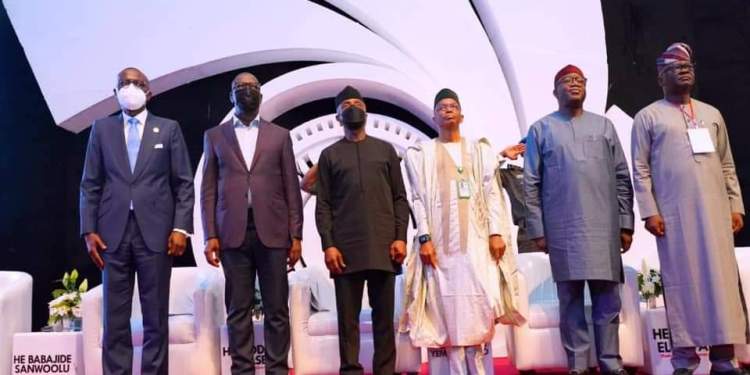 Four State Governors on Thursday called for the creation of state policing across the country.
Lagos State Governor, Babajide Sanw-Olu was joined by his counterparts from Kaduna, Nasir El-Rufai; Edo, Godwin Obaseki and Ekiti, Kayode Fayemi.

They made the call at the maiden edition of Ekiti State’s maiden investment forum in Ado-Ekiti.
“One point that we should not drop an eye on is the issue of state police,” Sanwo-Olu said. “We’ve all talked about it. We should not let this opportunity slip by again.”

“Governor Sanwo-Olu has spoken the minds of Governors collectively that we need multi-level policing arrangements,” Fayemi added.
Edo’s Obaseki noted that “we will not be able to run away from the fact that states will now have to play much more role in the entire value chain for security.”

For El-Rufai, the importance of segmenting police work even extends to the local government level.
“My colleagues have articulated it correctly,” he said. “And the APC through federalism committee has made the case that we need multi-level policing, not just state police, even local government police.”
Nigeria’s current policing system is controlled by the Federal Government.