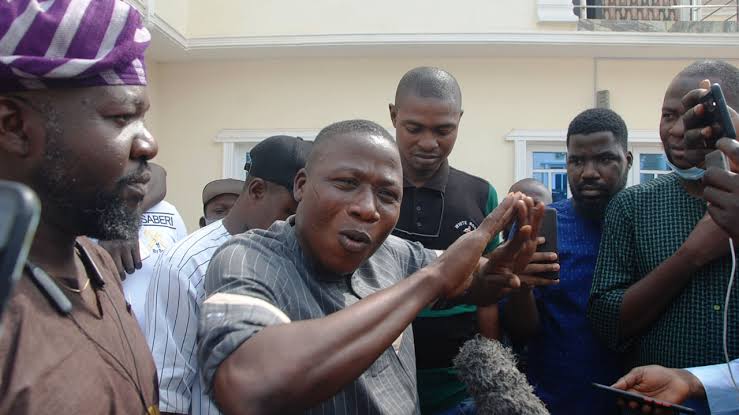 Yomi Alliyu, SAN, lawyer to Yoruba activist Sunday Adeyemo also known as Sunday Igboho has demanded a N500, damages and a public apology from the Department of State Services for allegedly trampling on the rights of his client and for destroying his Ibadan residence when the secret police ‘raided’ the house early Thursday.

Alliyu made this known in a statement released on Saturday titled, ‘Illegal and Grossly Unconstitutional Invasion’.

He noted that his client has “always preached peace and warned his followers never to have recourse to violence saying that ‘it is God and alale (ancestors) that will fight for Yoruba Nation”.

The secret police had raided Igboho’s Ibadan residence in a Gestapo style on Thursday around 1am. Thirteen of his guards and close associates were arrested and paraded by the DSS while the secret police also claimed two of his followers were killed in a gun duel.

Though Igboho had escaped the raid, his house and cars were riddled with bullets while bloodstains splattered over the floors of the house.

Reacting in the statement, the senior advocate said, “There is nowhere in the civilised world that a citizen who had no prior invitation by security agent or had resisted arrest will be so invaded with his rights to dignity of human persons, ownership of property and sanctity of life trampled upon during the invasion.”

“No demand to enter was made but rather they shot their way into the house allegedly killing seven people though DSS spokesman admitted killing two people.

“A lady among the invaders was allegedly shouting, ‘if you get him gun him down’. There and then our client knew that the mission was to get rid of him and not to arrest him. This belief becomes more realistic in view of the fact that the CCTV recorder was off and taken away so that the carnage will not be shown to members of the public. Our client then knew that he was to be taking dead or alive as allegedly stated by the lady among the raiders.”

The lawyer said the DSS shot indiscriminately at the building “all the expensive vehicles in our client’s house were shot at and destroyed”.

He added, “The rampaging operatives were disappointed that they could allegedly not find a single gun or ammunition in our client’s house hence their arresting two police escorts of Mr Sunday Igboho’s guests and added their guns to those harvested from their armoury with a view to making members of the public to believe that our client keeps militia or as stated by them, he is about waging war on Nigeria. Will this be with his mere amulets. People who know our client of over 20 years will testify that Igboho Oosa does not carry gun on his person!”

“One thousand euro, two million naira, expensive jewellery worth millions, travel documents, amulets, iPhone 12 belonging to him, phones of about 15 others living in the house including those killed by the raiders and other belongings yet to be identified belonging to his wives were carted away. The only guns were those of the police escorts of his guests!

“We hereby demand that the Federal Government orders an investigation into the actions of the various security operatives led by DSS that raided Chief Sunday Adeyemo’s house with a view to sanctioning them and release all the innocent people arrested and compensate the families of those murdered.

“Our client should also be paid N500million as reparation for damage to his exotic cars that include Mercedes Benz G-Class and 2019 Lexus Car. We also demand a public apology.

“Most importantly, trampling of our client’s fundamental rights including tagging him as criminal by exhibiting DSS guns as his should stop forthwith,” the lawyer said.