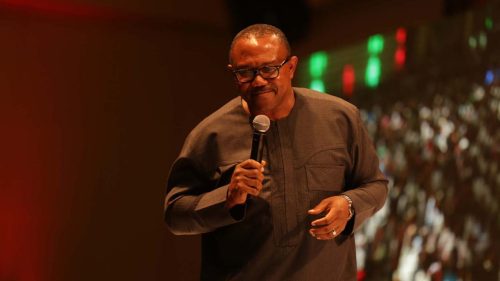 On December 5, Peter Obi, the presidential candidate of the Labour Party, released his 72-page manifesto titled ‘It’s POssible: Our Pact with Nigerians’.

The manifesto listed seven priority areas that his administration would concentrate on if elected president, including the introduction of hourly minimum wage and health insurance for 133 million Nigerians.

Reacting in a statement issued on Tuesday, Onanuga said the policy document is filled with “fallacies and false statistics”, adding that Obi has no capacity to deliver his promises.

“By now, many of the gullible followers must have been utterly disappointed that their man didn’t offer them anything to be proud of after all the blusters and the initial leakage of the document, which contains, strangely, 15 pages of the biographical sketches of Obi and his running mate, Datti Baba-Ahmed,” he said.

“Mr Peter Obi’s document contains no grand policy initiatives and options to excite right-thinking Nigerians. It was silent about how Obi wants to achieve his high falutin objectives. Instead, it will set alarm bells ringing in the south-south and North East as Obi promises to ‘engineer the transition of Nigeria from a fossil fuel dependency to climate and eco-friendly energy use”.

“One of the fallacies contained in the document, which Obi has often repeated to his followers, is that Nigeria is a failed state. We wonder whether the Labour Party candidate sometimes bothers to check the meaning of a failed state and whether the country he dreams to govern falls into the mould of Yemen or Somalia, where institutions of government have lost total control of their societies.

“Another fallacy is Obi’s claim that Nigeria recorded modest gains between 1999-2015, the PDP years, even when all verifiable evidence points to the contrary. The Labour Party candidate simplistically diagnosed Nigeria’s problem as ‘elite capture’, which is self-indicting as he and his running mate, who he styled ‘new breed’ are members.

“He claims incompetent leadership has divided the nation, playing up religious and ethnic sentiments. Another self-indictment as the hallmark of his campaign has been to jump from one church to the other, positioning himself as a ‘Christian candidate’ and inciting the church against the current APC government.

“In fact, the document Mr Obi released is a poor imitation and regurgitation of what the current APC-led administration of President Muhammadu Buhari is doing. If anything, the document showed him as a man without honour, credibility and character because he is promising to do all the things he has railed against and de-legitimised in the past.

“We make bold to state that Mr Obi lacks the mental acuity and rigour for the job he is asking Nigerians to entrust to him. He is surely not ready and prepared to be the president this great country deserves. And if indeed the Labour Party candidate paid for the wishy-washy document.”