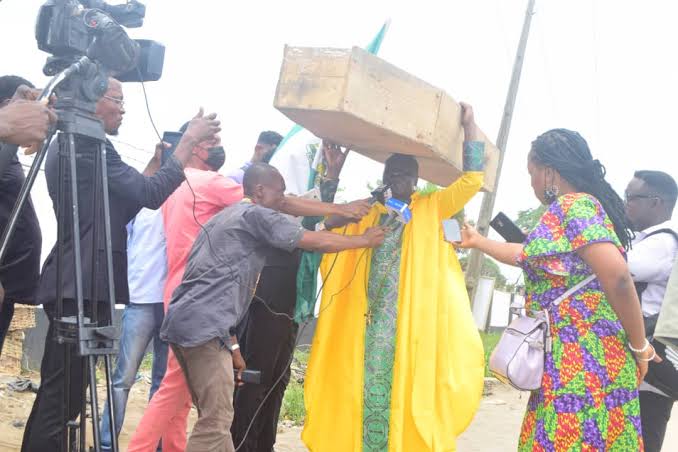 Arcbishop Benjamin Samson mustapha carried a casket on his head and walked on the street of Lagos, lamenting the pitiable state of the Nigerian nation. He felt so bittered that a nation which was tipped to be the foremost nation on the African continent had suddenly become a beggar to bigger nations of the world with outrageous debt on her head.

Speaking to newsmen the foremost prophet in Nigeria admitted that the current situation of Nigeria required carrying a coffin, he said “at 62,Nigeria is on the decline, nothing is in good condition,our children have been kept out of school by this insensitive government that lacks compassion, no, this evil must stop, we must vote them out of power” he lamented.

Opinion: The Jagaban of Borgu is not a saint but the best option for Nigeria 2023! – Hon. Khairat Animashaun-Ajiboye

He was full of indignation because of the Muslim /Muslim ticket of APC and chastised governor Simon Lalong for betraying the entire Christians in the country by advocating for the Muslim/Muslim ticket. He said “lalong you have betrayed your faith, you have betrayed your master, as a knight you are supposed to protect the interest of Christians,but you have allowed yourself to be bought with a plate of porridge yam, you are a shame to the knighthood and Christianity, you are Judas Iscariot”.