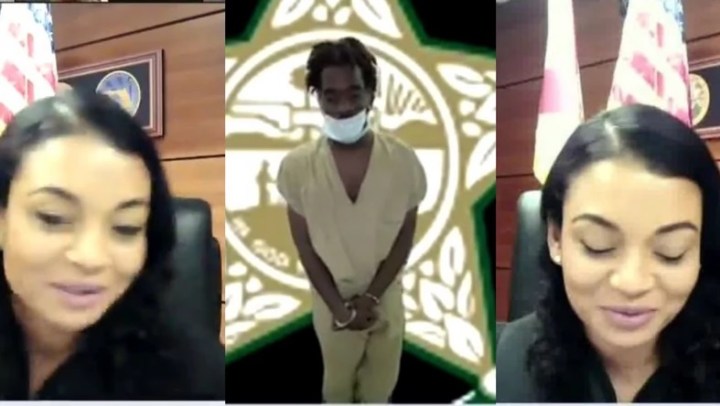 A crime suspect who appeared before a court to be tried with the potential to end up in prison forgot about his fate suddenly after seeing the face of the trial judge.

The burglary suspect identified as Demetrius Lewis appeared before a court in Florida on Thursday, February 4 during a virtual hearing.

Reports say he is facing a charge of attempted burglary and possession of the drug ecstasy.

As soon as he set his eyes on the female judge who would be hearing the case involving him, the suspect could not help expressing affection towards her, although he was in handcuffs.

Next Read: DSS Warns Against Alleged Plans To Cause Ethnic Religious Violence

A video in circulation on social media shows Demetrius Lewis saying: “Judge, you [are] so gorgeous, so gorgeous judge, I just had to tell you. You’re gorgeous. I love you. I love you.”

He started by asking the judge “how are you doing”, to which she replied “I’m good” before asking him in return how he was doing.

If not for the fact that the judge identified as Tabitha Blackmon is undoubtedly pretty, one would have said that Demetrius Lewis was just deliberately flattering her probably to court leniency but it appears he was genuinely expressing his feelings.

Related tags : 'You're Gorgeous I just Had to Tell You; I love you'–Crime Suspect Tells Beautiful Judge (video)