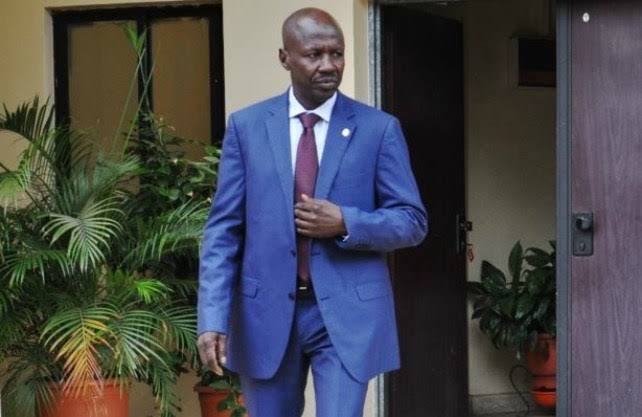 President Muhammadu Buhari has set up a panel to probe the corruption allegations against the acting Chairman of the Economic and Financial Crimes Commission (EFCC).

Magu was accused by Attorney General of the Federation, Abubakar Malami
of diverting recovered looted funds to personal use, in a letter sent to the President.

According to reports, Buhari has now set up a panel to look into the allegations, and is said to be ready to wield the big stick if the panels reports finds Magu guilty as charged.

The panel is to be headed by the Chief if Staff, Prof. Ibrahim Gambari.

Magu was appointed acting EFCC Chairman in November 2015, and he is yet to be confirmed by the Senate.

Opposition, the People’s Democratic Party (PDP) has also cried foul of Magu’s situation, saying it is a depiction of the alleged corruption of the present government.

Kola Ologbondiyan, Spokesperson of the PDP said the memo against Magu “exposed the abysmal corruption, deception and hypocrisy that pervade the Buhari administration.”

In its statement, it said; “The world can now see that the much hyped anti-corruption fight of the Buhari administration, has been nothing but a huge fraud and a racket by certain persons in the APC administration to harass political opponents, intimidate and extort money from innocent Nigerians and steal public funds.

“Nigerians and the world have further seen why corruption has worsened under the Buhari administration, as copiously documented by credible international organization, including the Transparency International (TI).

“Instead, Mr. President had continued to run a system that condones corrupt practices by officials of his administration while providing cover for individuals indicted for corruption including those who are now serving as cabinet ministers and other federal appointees in his government,” the statement read in part.

The PDP has also called for the resignation of Magu over the allegations hanging over his head.