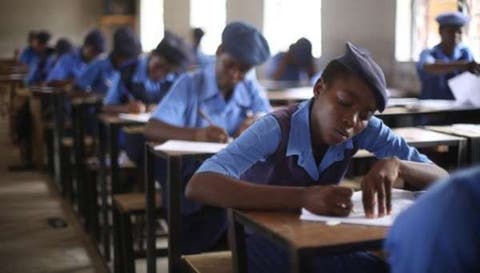 Claims by state governments that they had made adequate preparations for students taking the West African Senior School Examinations, which would start on Monday (today), attracted mixed reactions from parents and teachers on Sunday.

State governments told The PUNCH that they had fulfilled all the guidelines released by the Presidential Task Force on COVID-19 to prevent a further spread of COVID-19 during WASSCE.

While some parents expressed satisfaction with the preparations, others said state governments were making claims that did not exist.

Some parents, in separate interviews with our correspondents, lamented that COVID-19 had become a tool by schools, particularly private ones, for exploiting students.

Parents said the need to provide face masks, personal protective equipment and other non-pharmaceutical items had increased their financial burden.

In Ogun State, the Special Adviser to the state Governor on Primary and Tertiary Education, Mrs Ronke Soyombo, said apart from teachers in senior schools, all teachers in junior schools were mobilised for the two-week revision for students.

Soyombo, in a chat with The PUNCH, said all students were given two face masks, adding that each school had thermometers, running water and buckets.

But some teachers, who confided in one of our correspondents, lamented that as of Friday, the personal protective equipment had yet to be made available in schools.

While some teachers said they had yet to make provision for social distancing, others said the classrooms had been arranged for the exams.

A teacher, who spoke on condition of anonymity, said, “As of Friday, there was no provision for the PPE for both teachers and students. Some schools were given facemasks, sanitisers, soaps, infrared thermometer with buckets. Certain schools were given tanks.”

A parent, who spoke on condition of anonymity, said, “ The school of my children has mandated us to get them at least three face masks, tissue paper, sanitizers and face towels. All these would be shown at the school entrance and if students do not have them, the school won’t allow them in. All these will constitute a financial burden for poor parents.”

In Katsina, the Katsina State capital, Alhaji Abdullahi Moshood, expressed fear about the performance of the students.

He said, “The school, which my boys attend, insisted that we must pay N25,000 as third term school fees and also N3,000 per student as COVID-19 charges. Of course, we paid as those were the criteria the schools insisted that we must meet before the children could be allowed to take the examinations.”

But another parent, Mallam Abdulmumin Kusada, whose daughter attends Hassan Iro Inko Girls College, Katsina, lauded the state government for its commitment to the education sector.

He said, “My daughter will take WASSCE. We did not pay any money. We only gave two face masks and a bottle of sanitiser. Since they resumed, the school had intensified their lesson periods.”

But some teachers lamented that they were still being paid a small amount of money despite their increased workload.

The teachers, who confided in The PUNCH, said some of them were still being paid N10,000 per month.

The Public Relations Officer of the state Ministry of education, Mallam Salisu Kerau, said the state had already commenced monitoring of schools to ensure that the new hours of lessons were complied with.

In Sokoto State, a female teacher at Nana Girls School, Sokoto, who spoke on condition of anonymity, said, “Apart from the hand-washing basins with water and soap, and the mandatory use of face mask, there are no any extra cautious plans to check the spread of coronavirus as the terminal examination starts on Monday.”

Not all parents can afford tutorial classes — Retired civil servants

On his part, a retired civil servant, Mallam Sani Maifata, said, “It is not all parents that are buoyant enough to arrange extra lessons for their children during the lockdown.”

In Enugu State, a student of the Community Secondary School, Ubahu, in the Nkanu East Local Government Area, Miss Eze Chinemere, told one of our correspondents that students were mandated to provide their face masks.

The Akwa Ibom State Commissioner of Information and Strategy, Ini Ememobong, said adequate provisions had been made to ensure strict compliance by students with COVID-19 guidelines.

However, parents, who confided in The PUNCH, said government was “unnecessarily giving credit to itself.”

A teacher in the Community Secondary Commercial School, Itam, in the Itu Local Government Area, who also spoke on condition anonymity, said the school was facing a lot of challenges in terms of keeping the environment clean”

In Benue State, parents are to provide at least three face masks for each student, while schools are to disinfect their environments, provide water and soap at points of entry and other strategic places.

A parent, Mr David Iortyom, said, “Since they resumed two weeks ago, my son, Terna, told me that their principal mandated them to get three face masks at least or else they would not be allowed into the classes.”

The principal of Apple International School Kighir, Torhide Abuur, who lamented the two weeks period for preparation, said it was unfair as many students were engrossed in mundane things and hardly had time to read.

He noted that there was low compliance with COVID-19 protocols, adding that most of the schools in Makurdi did not have thermometers and nobody was testing for temperature at the gate.

When contacted, the state Commissioner for Education, Professor Dennis Ityavyar, said all schools that registered for the West African Senior School Certificate Examination in the state would participate in the examination.

A member of staff of Orji Secondary School, Gombe, who spoke on condition of anonymity, said the students had been in holiday mood since their return.

On his part, a father of an SS3 student of Government Science Secondary School, Gombe, Adamu Ciroma, said before the resumption of school, his son had been informed on safety protocols.

The state Commissioner of Education Dr. Habu Dahiru, in an interview with The PUNCH, said students were ready for the examinations.

The Rivers State Government also said all necessary arrangements had been made available to secondary schools.

The state Commissioner for Education, Prof Kaniye Ebeku, who disclosed this to one of our correspondents, said the state government had provided all necessary supports to ensure the safety of students.

But some teachers disagreed. They said not all the necessary materials had been provided,

A public school teacher, who confided in The PUNCH, said there were no chairs and desks for the students to write with even though the school was recently renovated.

He said, “They (Government) have distributed hand sanitisers, buckets for washing of hands and they have warned that social distancing should be maintained. Also, they advise that wearing of face mask is compulsory.

On the challenge facing the school, he said, “In my school, there are no chairs and desks for the students to write with.”

On his part, another teacher who simply gave his name as Emmanuel said the school environment, where he teaches, was nothing to write home about.

“Apart from where I teach, some of the government secondary schools here in Oyigbo are not actually clean. Some have overgrown weeds and I don’t think things have been done properly.”

Meanwhile, the West African Examination Council has called on supervisors, invigilators and students to shun malpractices and observe the coronavirus guidelines.

Head, Public Affairs, WAEC, Mr Demianus Ojijeogu, who spoke to The PUNCH in a chat, also said WAEC had provided the PPE for all its supervisors who would be participating in WASSCE supervision.

On his part, the Secretary-General of the Nigeria Union of Teachers, Dr Mike Ike-Ene, commended the Federal Government for providing the PPE.

However, he said that governments’ concentration was more for the exit students and environments adding that the NUT had told teachers to take personal responsibility where government failed.