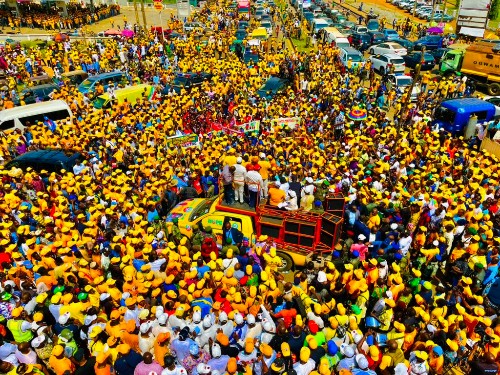 The Independent National Electoral Commission (INEC) has published guidelines for the conduct of political rallies and campaigns as well as election expenses of parties, candidates and aspirants.

In a statement released on Thursday by Festus Okoye, its national commissioner, INEC said copies of the guidelines will be made available to political parties, civil society groups, and other critical stakeholders.

According to the guidelines for rallies and campaigns, political parties “must issue in writing a notice to the Commissioner of Police of the State or the Federal Capital Territory indicating the exact venue and time of the rally or procession and pledging peaceful conduct and control against violence or public nuisance”.

“Political Parties shall transmit to the Commission, through the Electoral Officer at the Local Government Area and the Resident Electoral Commissioner at the State, via a designated portal and also in hard copy, details of the schedule of their political rallies and processions at least 10 days to the date of the political rally or procession. The notice shall be jointly signed by the National Chairman and National Secretary of the Political Party,” the guideline reads.

“Political Parties shall submit to the Commission, in soft copy through a designated portal and in hard copy, notification of the schedule of their campaigns, stating the date, time, venue, agenda and list of members of the Organising Committee and Police approval within the jurisdiction of the campaigns, within a minimum period not later than 10 days to the commencement of their campaigns.”

The guideline also states that campaigns by parties and their candidates must be based on their constitution and manifestoes, and must comply with any regulations issued by the National Broadcasting Commission (NBC) as well as COVID-19 safety protocols.

For party finances, INEC said political parties must inform the commission of and transfer any funds or other assets sent to them from outside Nigeria within 21 days of receipt.

“The maximum amount of money or other assets that an individual, a group of individuals or an entity can donate to a political party or aspirant for an election shall be N50,000,000. A Political Party shall not accept any monetary or other contribution which is more than N50,000,000 except it identifies and discloses the source of the contribution to the Commission,” the guideline reads.

“Every Political Party that participated in an election shall submit to the portal designated by the Commission an audited report of its election expenses within six months after an election. The reporting period shall commence 360 days to, and including, the Election day.

“Every Political Party sponsoring the election of a candidate shall submit to the portal designated by the Commission a report of the contributions made to it by individuals and entities within three months after the announcement of the results of an election. The report shall indicate the names, addresses, occupation of donor(s) and the amount.”