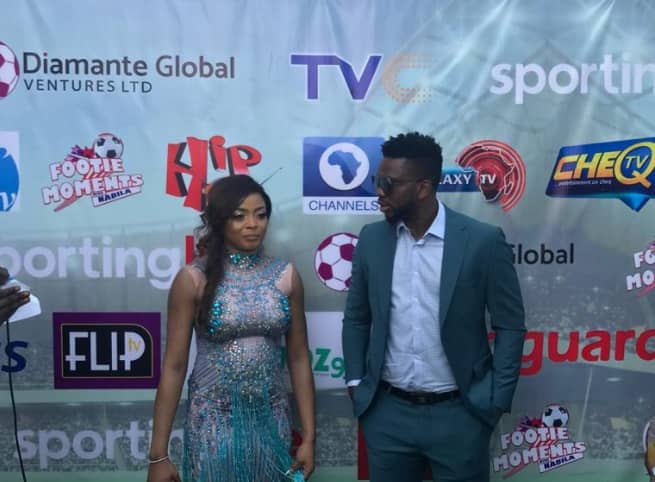 Dream team 1 goalie Dosu Joseph and ex-super Eagles defender and current assistant coach Joseph Yobo were on ground to endorse the show and give the season 1 a pass mark. Other celebrities that graced and endorsed the tv show were Actress Caroline Danjuma ,Toyin Abraham ,Asiri comedy and Nabila’s husband Oritsefemi.

Speaking at the official launching of the event, the brain behind the initiative, Nabila Fash , wife of musician Oritsefemi expressed her joy in seeing through season one saying that she hopes season 2 will be far better.

’’Season 1 was interesting and appealing , my prayers right now is for the coming season to be far better . I think it’s the right time to introduce the exciting show to my fans, loved ones and the country as a whole’’, She said.

Footie moments with Nabila is segmented into 4 and they are ‘’ Where are they now’’this segment provides answers to the whereabouts of ex-Super eagles and profiles what they are doing at the moment.

Talent discovery is the second segment where Nabila goes into slums and other unpopular areas to discover hidden talents
There is the ‘’Celebrity Guest’’ segment where Nigerian celebrities who have passion for football are being interviewed.

The fourth one is the ‘’Vox Pop’’ segment where football questions are thrown at people on the street to test their knowledge of the sport.

Asked why she came up with the idea of footie moments with Nabila , she said she loves football a lot and chose to convert her passion into business and it seems paying off.‘’ just last season we found a boy in a slum in Ajegunle who goes by the name Joseph Okorie ,I took him home registered him in a school in Lekki and then facilitated his move to a Turkish club Antalayspor academy.

On sponsorship and partnerships , Nabila ,said the season 1 was self funded and now appeals to football stakeholders to key into the season 2 by way of partnership.
Red Also: End SARS: No One Was Killed at Lekki Toll Gate – Gen Buratai

A duly signed autograph Odion Ighalo’s Manchester United and Serie A Crotone’s new signee Ogenyi Onazi’s Jerseys were on display for auction at the footie moments with Nabila’s studio.

Nabila thanked everyone present at the occasion especially her husband Oritsefemi who she said has been her source of inspiration.