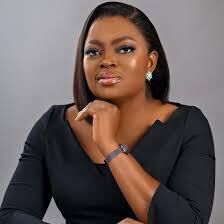 Funke Akindele is a renowned filmmaker, philanthropist, entrepreneur, youths/women advocate and a lawyer. The 44 year old Ikorodu-born lawyer has for almost two decades provided job opportunities for thousands of Nigerians and discovered many talents through her creative enterprise. She remains a shining light to many young women aspiring to shatter the proverbial glass ceiling despite the societal biases and encumberances.

The creative prodigy popularly known as Jenifa, due to her role in her famous epic production'”Omo Ghetto” presides over a multi-million film production company that has become the toast of many super brands in the country. Sitting atop an international brand despite starting as a nobody speaks volume of her innate ability to make success out of every venture she goes into.

Her over 20 million followers in the social media space is a staggering number. It is safe to say not all will like her but she remains a role model to many who truly appreciate her journey to success and the persona she projects to the world. She is, no doubt, a lady to reckon with.

I initially had my doubts regarding Funke’s choice as a Deputy but later realized it was a huge addition in terms of Funke’s pedigree, steely resolve and innate ability hidden behind the camera. Like many of our youths today whose potentials remain latent until they are called to assume the mantle of leadership, my knowledge of Funke Akindele’s other outstanding qualities was non existent until I interacted with her at close quarters,

Funke’s involvement as a Deputy may not yield 1m votes of the 20 million followers she has within the cyberspace but even a meager 0.1 or 0.2% will bring additional 20k or 40k votes and I do trust her huge followership on social media will generate publicity and facilitate positive engagements towards the actualization of Jandor’s Gubernatorial ambition.

Funke Akindele may have joined partisan politics recently but she remains a very popular personality. Just imagine how her joining the PDP has put the party’s quest to win Lagos in 2023 in the front burner of national discourse across social media and traditional news platforms.

Jandor/Akindele ticket is already sending shivers down the spines of the APC. It is a potent and surefire combo capable of defeating the APC in next year’s Guber election.