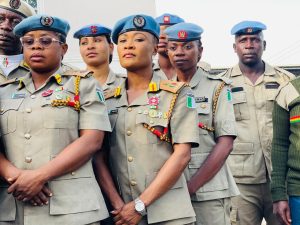 *To be transmitted to President Buhari for accent*.

For the second time, the Peace Corps of Nigeria (PCN) Establishment Bill was on Wednesday, December 7, 2022 passed by the two Chambers of the National Assembly.

Sponsored by the Chairman, Senate Committee of the Nigerian Army, Senator Ali Ndume as…, that of the House of Representatives was sponsored by the Chief Whip, Rt Hon Mohammed Monguno as HB17.

With the overwhelming passage of the Bill on its merit, all is now set for the Clerk of the National Assembly to transmit the Bill to President Muhammadu Buhari for Presidential Accent.

The Bill, among others, seeks to establish the Nigerian Peace Corps as a body charged with the responsibility to develop, empower and provide gainful employment to youths, facilitate peace, volunteerism,, Community Service, Neighborhood Watch and Nation building.

According to part Vlll of the Bill passed, the Bill when accented to by President Buhari, would give statutory backing to the existing Peace Corps of Nigeria.

The Peace Corps of Nigeria established over 24 years ago under the National Commandant, Professor Dickson Ameh Akoh is Incorporated in Nigeria under the Company and Allied Matters (CAMA) Act and accorded the Federal Government recognition through the Federal Ministry of Youth Development.

Due to the value driven programs of the Corps, aimed at the socio-economic empowerment of the Nigerian youths and its onerous contributions to peace building and advocacy, the United Nations in 2011 accorded the organization a Special Consultative Status while the African Union in 2016 accorded same status to the organization, thus, making it a member of the Social and Economic Councils of both the United Nations and the African Union.

So far, the organization has a well structured network of offices in the 36 States of the Federation and the Federal Capital Territory FCT..

It has a membership strength of over 187,000 comprising of both regular staff and volunteers.

For the landmark achievements and accomplishments of the organization thus far, the Corps and its National Commandant have received over 110 Awards Nationally and Internationally.