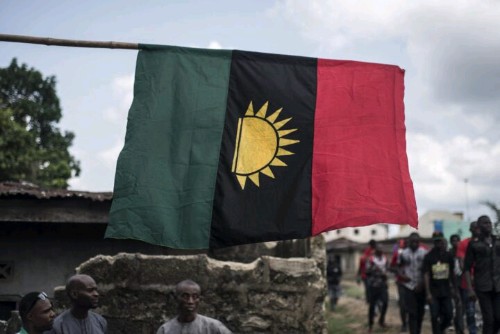 The Indigenous People of Biafra (IPOB) says it is not interested in Nigeria’s 2023 general election.

In a statement on Monday by Emma Powerful, its publicity secretary, the group also denied its involvement in an attack on the office of the Independent National Electoral Commission (INEC) in Imo state.

Aside from attacks recorded in previous months, INEC offices in Osun, Ogun, and Ebonyi have been razed within the last five weeks.

2023: Past Winners Tinubu’s ‘One Day Governor’ Initiative Urge Nigerians To Vote him as Next Nigerian President

The police in Imo had said gunmen suspected to be IPOB members were behind the attack on the INEC office in Oru west area of the state.

Speaking on the development, IPOB said claims that its members were behind the attacks in Imo are false.

“We the global family and movement of the Indigenous People of Biafra (IPOB) under the command and leadership of the great liberator Mazi Nnamdi Okwuchukwu KANU wish to disassociate ourselves from the recent attacks on the INEC office in Owerri Imo State,” the statement reads.

“Neither IPOB nor ESN operatives have anything to do with Nigeria’s fraud elections in 2023. We have never supported nor involved ourselves in any election obstruction or violence as a movement.

“The only action we can take is to call our people to boycott voting if the need arises. But as of today, IPOB is not interested in Nigeria and its electoral activities and has never asked anyone to carry out any attack on our behalf.

“For the Nigeria Government and her compromised Police to link IPOB and ESN to their sponsored attacks on INEC Offices has shown that they are deluded, misguided, deceitful, and don’t know the norms on which IPOB operates.

“Nigeria’s government and her security agencies are working day and night to blackmail the IPOB self-determination movement.”