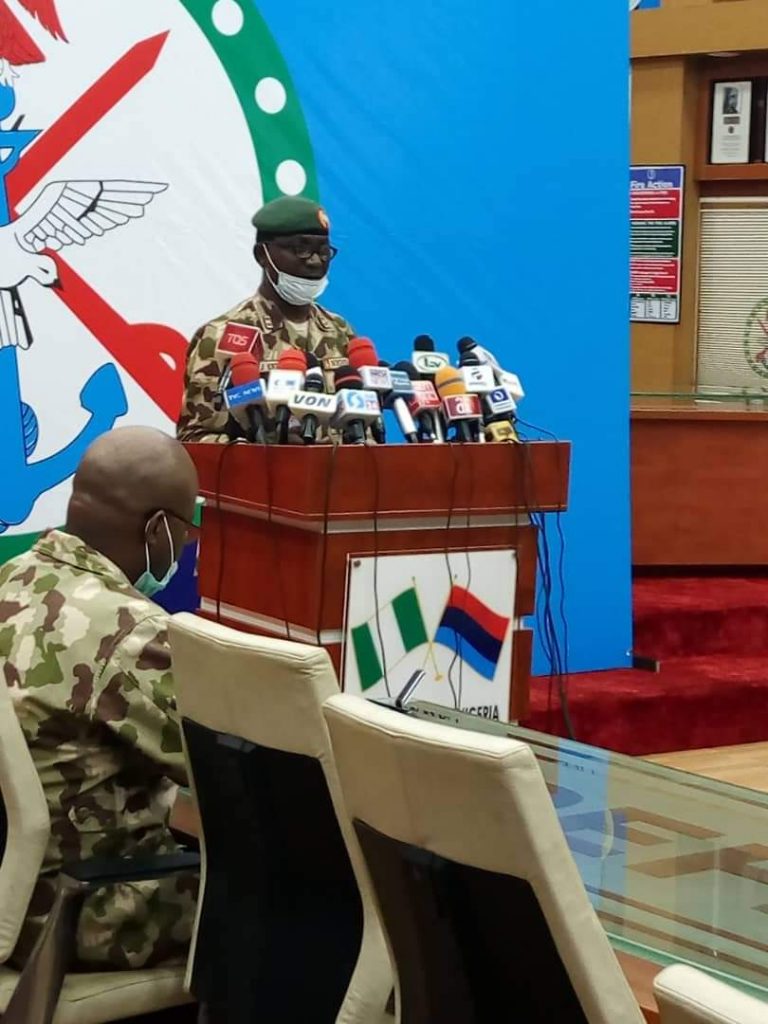 In line with our resolve to keep the general public duly informed of the operations of the Nigerian military and other security agencies, I will be briefing you this afternoon accordingly. It will cover 24 July to 6 August 2020.

The Armed Forces of Nigeria have continued the aggressive clearance operations in the entire North-West zone of the country. Within the period under review, troops in the Joint Operations Area scaled-up kinetic and non-kinetic operations in the general areas of Katsina, Zamfara, Sokoto and adjoining states leading to gradual restoration of overall human activities in the zone. Recall that the activities of armed bandits, cattle rustlers and kidnappers and other sundry crimes hitherto made life unbearable for locals in the afore-mentioned areas. However, through the concerted efforts of Operations HADARIN DAJI, KATSINA, ACCORD and SAHEL SANITY, farmers have returned to their farms while other economic activities are gradually picking up across the zone.

Additionally, within the period under review, troops continued to dominate the general area with clearance patrols, aggressive fighting patrols, raids, ambushes and confidence-building patrols. This is additional to several air bombardments of identified bandits’ locations and hideouts, which has made it possible for the conduct of farming and other activities in the zone. These operations also resulted in the rescue of kidnapped victims, recovery of rustled livestock, arrest of suspected armed bandits informants and collaborators in addition to the recoveries of large cache of arms and ammunition, among others within the period.

Troops of Operation DELTA SAFE have intensified the fight against crude oil theft, pipeline vandalism and illegal oil bunkering in the region with attendant successes. Within the period under review, Operation DELTA SAFE discovered and deactivated 25 illegal refining sites in Rivers, Cross Rivers and Akwa Ibom States. Also, a total of 342, 000, 00 litres of product suspected to be illegally refined AGO were impounded. Subsidiary operations CALM WATERS II and SWIFT RESPONSE have continued to record remarkable successes. The successes recorded within the period include seizure of 141 x 50 kg bags of foreign parboiled rice as well as arrest of boats involved in smuggling activities amongst others.

As part of non kinetic activities, Nigerian Navy Ship DELTA led a peace and reconciliation meeting with the stakeholders of Gbaramatu Kingdom of Warri South LGA of Delta State. The peace meeting was held following recent threats to disrupt oil and gas infrastructure by the people of Gbaramatu Kingdom. Accordingly, the Naval Base summoned a meeting with the key actors in the agitation. The activists thanked the military for the timely intervention and promised to tow the path of peace. The meeting was fruitful as they promised to do all within their reach to forestall violence in the area. They also solicited for the cooperation of the military in providing security to the general area.

Operation SAFE CORRIDOR is a Defence Headquarters led non-kinetic multi-agency humanitarian operation established by the presidency, designed to De-radicalize, Rehabilitate and Reintegrated willingly surrendered and repentant Boko Haram combatants. In addition to the Armed Forces of Nigeria and other Law Enforcement and Security Agencies, 12 other Federal Government Ministries, Departments and Agencies including NEDC as well as local and international NGOs collaborate and support the Operation. The Operation is guided by extant provisions of the Constitution of the Federal Republic of Nigeria 1999 (As Amended) and International Humanitarian and Human Right Laws. It may be recalled that, in one of our weekly press briefings, in which members of the Advisory Committee of the Operation were present, we briefed on the purpose and aim for which Operation SAFE CORRIDOR was established. We also explained the processes involved in the De-radicalization, Rehabilitation and Re-integration (DRR) programme.

It is highly desirable at this moment, to further explain some key points about De-radicalization, Rehabilitation and Re-integration (DRR) programme in order to allay the fears of some members of the general public and reassure that, these individuals were duly profiled and confirmed to be; low risk and not low risk repentants, who were ascertained to be innocent and forcefully conscripted to join the sects and are categorized as victims. Additionally, monitoring mechanisms have been put in place to monitor their activities in the society.

In the North-Central zone, troops conducted Civil Military Cooperation (CIMIC) activities in addition to concerted Reconciliation and Conciliation efforts in the form of stakeholders’ meetings amongst the various ethnic groups in the zone. These non-kinetic efforts were supported by ongoing kinetic operations in the form of ambushes, raids, and clearance patrols at various locations which resulted in appreciable successes within the period under review. Notably, between 30 July and 1 August 2020, Headquarters Operation SAFE HAVEN commenced the survey for the drilling of boreholes at Shimlang community in Mangu Local Government Area of Plateau state and equally commissioned 2 other solar powered boreholes at Messiah College and Gana Ropp communities in Barkin Ladi LGA of Plateau State.

Furthermore, between 1 and 4 August 2020, Headquarters of Operation SAFE HAVEN, as part of Reconciliation and Conciliation efforts, fostered several stakeholders meeting within the period under review. Areas covered in this regard include communities in Sanga and Jama’a Local Government Areas of Kaduna State, Barkin Ladi and Bassa Local Government Areas of Plateau State. Meetings were also held at Headquarters of Sectors 3 and 4 of Operation SAFE HAVEN. All meetings were held with the leaders of the various ethnic groups including Hausa, Fulani and Berom amongst others. Issues discussed centred on habitual and peaceful coexistence among the various ethnic groups. Similarly, Headquarters Operation WHIRL STROKE held peace-meetings in Katsina-Ala Local Government Area of Benue State between the Ardo of the Fulani community and the Tiv leaders in the general area. Discussions centred on peaceful coexistence among them.

Relatedly for the period, troops of Operation SAFE HAVEN also conducted a drug raid operation on 4 August 2020. Accordingly, troops in conjunction with police operatives and vigilante conducted drug raid to Unguwar Mata and New Market General Area in Mangu Local Government Area of Plateau State following credible intelligence on the activities of drug peddlers in the general area. Troops arrested 7 suspects at the scene and recovered large quantity of substances suspected to be Cannabis Sativa and other illicit drugs. The suspects were subsequently handed over to police for further action.

The Military High Command commends all the gallant troops of the Armed Forces and personnel of other security agencies involved in various operations across the country for their commitment and professionalism. Troops are further encouraged to remain resolute and decisive in curtailing the activities of terrorists, armed bandits and other criminals. The High Command of the Armed Forces also reassures the general public of its commitment to securing the country for all human activities to strive. Members of the general public are, as always, enjoined to continue providing timely information on the activities of criminals in their various localities to the nearest military and other security agencies location for prompt and effective action. Thank you.

Next Read: Nigerian Army Dismiss Female Soldier Raped by Bandits for Getting Pregnant