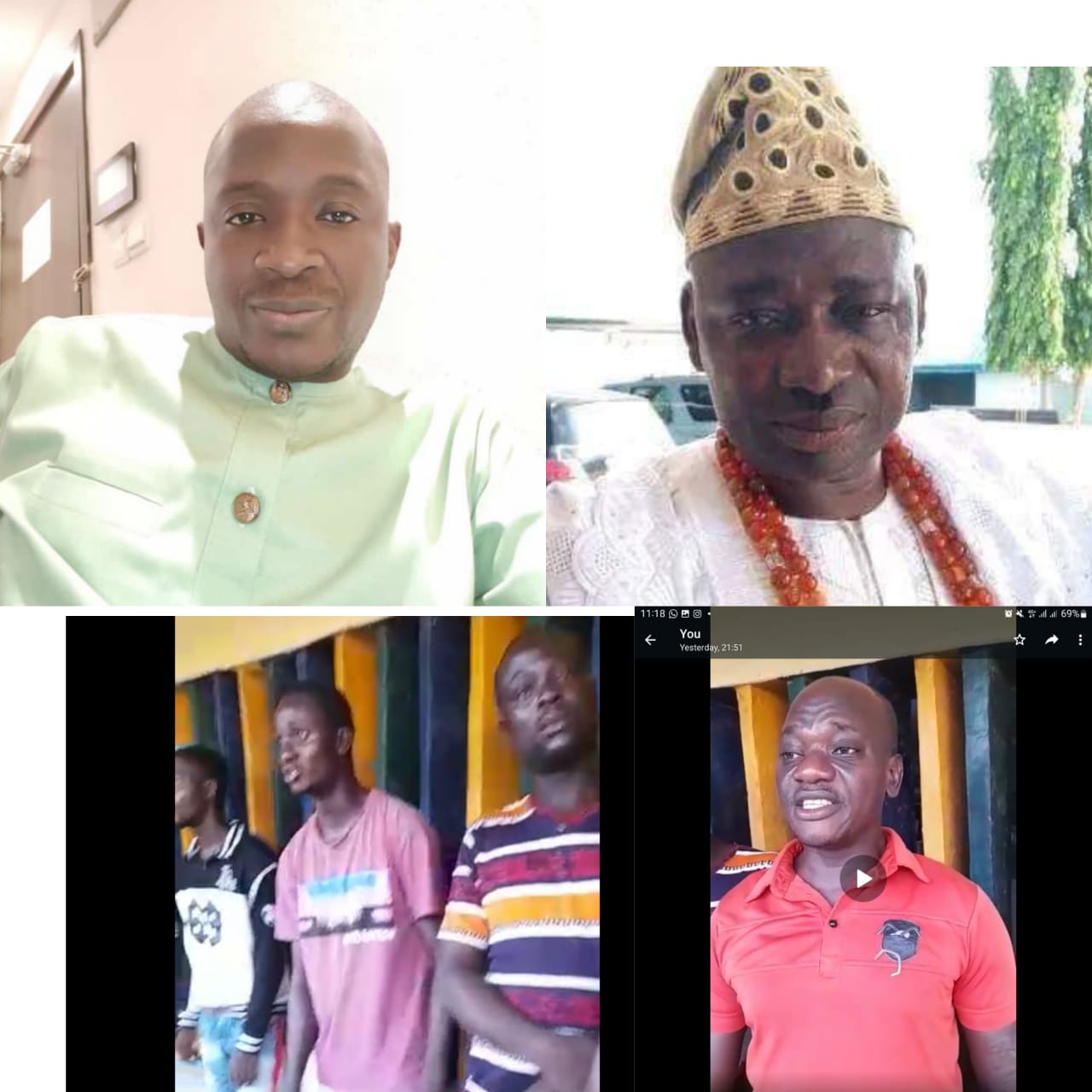 Nine notorious land grabbers, terrorizing Eti-Osa, Oreki Village, Ibeju Agbe, Ibeju Lekki and Epe Area of Lagos State, allegedly working for a renowned land grabber, Abubakar Maiyaki A.K.A Ajagungbale and Taiwo Enitiodunmo (A.K.A) T9, have been arrested in Lagos after their invasion at Odogbawojo Village with firearms on 21st November 2022, to perform their landgrabbing duty.

They were arrested by the Noforija Police Officers and later transferred the case to the CP Lagos State Crack team, on instruction of the Commissional of Police

Maiyaki, we gathered, is working hands in hand with Taiwo Enitiodunmo, an alleged Killer who was recently released from the Homicide, DIG Force C.I.D cell through the influence of one ACP Sanusi attached to the S.W.A.T, who is said to be senior brother to Maiyaki Ajagungbale.

Maiyaki and Taiwo are believed to be untouchable because of the closeness of ACP Sanusi to D.I.G force C.I.D who can easily misled the the D.I.G Johnson Kokumo on whatever police case hanging on T9 and Maiyaki

Enitiodunmo, we learnt, recently led armed land grabbers to Eredo and Odogbawojo where he allegedly killed a 4 years old boy and was released from Homicide, in other to escape justice within 4 months after his freedom. T9 is said to have been unleasing terror on Epe and Ibeju Lekki communities without fear of the law.

Abubakar’s team invaded Araromi Village at Abijo G.R.A where they attacked some Lagos State task force on landgrabber with men attached to S.W.A.T, who are working with him before the case was finally sent to the I.G.P Monitoring Unit, where the case was finalised and a legal opinion from force Headquarters followed but till now, the I.P.O in charge of the case has been accused of taken the file away through the influence of Maiyaki relationship with the ACP Sanusi.

In a petition written to the Attorney General of Lagos State, on 22nd November, 2022, the Erelu Family of Odogbawojo village, Mojoda, Eredo LCDA, Epe Local Government Area, Lagos State, claimed that, 9 of Abubakar Maiyaki’s armed thugs and hired assassins engaged to invade Odogbawojo were arrested and handed over to the CP Lagos Crack team but Peter Ogungbesan who hired Maiyaki and Taiwo Enitiodunmo to seek self help is elusive known that arresting their boys with Firearm in contravention of the Section 2,3,4,5,6 and 10 of Lagos State Properties Protection Law 2016.

A statement from the petition claimed that, This same Maiyaki is terrorizing Araromi in Abijo GRA, Ibeju-Agbe, Ibeju-Lekki perpetrating land grabbing because some aggrieved members within some of the communities, continue to engage him to intimidate and harassing their families or fellow community members, thereby cause breach of peace everywhere and it is time for the AG Lagos office to use Maiyaki case to sensitize Lagosian on the law that provides that, “No person or group of persons from the commencement of this law shall cause to be placed on any land or landed property agent for the purpose of forceful takeover of the said land.

The petition further claimed that, as it is, Mr. Peter Ogungbesan is also in contravention of the Lagos State Properties Protection Law for engaging Maiyaki to invade Odogbawojo with firearms.

According to the head of the family, Chief Bilesanmi Ashiru Oyede, “The gravamen of our complaint is that recently, precisely on the 21st day of November, 2022, one Peter Oriyomi Ogungbesan in connivance with one Abinleko Adeleke Sikiru engaged the service of the renowned and notorious land grabbers in person of Abubakar and Taiwo, who forcefully with the aid of his fellow land grabbing partners, as well as some unknown persons armed with dangerous weapons such as guns, cutlass, and others broke in and forcefully took over Odogbawojo Village.

“In the course of the said rampage and chaotic activities, Abubakar secured about Fifty (50) armed men pretending to be mobile police to illegally carry out their unlawful actions and consequently inflicted grievous harm on one Yusuf Ahmed and Adesegun Lawal, who are members of our family. They were only engaged to supply blocks to one of our assignees in respect of their land at Odogbawojo village.

“In order to carefully exclude themselves as the perpetrators of the evil and oppressive acts, the said land grabbers fronted their partner in crime, the said Abinleko Sikiru, who is the Baale of Ora’s PA, Mr. Peter Ogungbesan as a complainant wherein a frivolous and malicious charge was made against the said Yusuf Ahmed and Adesegun Lawal having assaulted, inflicted on them serious and grievous injuries and locked them up at Naforija Police Station, unjustly amidst mental and physical tortures in the said station.

“In an already planned script, the land grabbers ensured that one CHIA TERKUA, a
fellow land grabber in police uniform, is the Investigating Police Officer (IPO), who without any investigation of the fraudulent, frivolous, misconstrued, misconceived and malicious complaint of his fellow land grabbers, immediately charged the said Yusuf and Adesegun before the Magistrate Court, Epe in Charge No: EP/A/34/2022 COMMISSIONER OF POLICE VS. ADESEGUN LAWAL & YUSUF AHMED, who after serious arguments in court reluctantly granted bail on stringent bail conditions that took the said Yusuf and Adesegun to Ikoyi Prison, on their inability to perfect the stringent bail conditions all in a bid to get rid of them without just cause.

“It is not in dispute that Erelu family are the beneficial owners of all that parcel of land measuring 93.325 acres with Survey Plan No: I.O/0495/026j/2007/La lying, situate and being at Odogbawojo village, Mojoda, Eredo LCDA, Epe Local Government, Lagos State, having inherited same from our great grandfather, ADEBANJO who founded the present day Odogbawojo village. The said ADEBANJO of blessed memory in his life time begat ALAGBO and MIJA to whom he shared the said vast land before his demise.

“MIJA begat ERELU subsequently inherited the MIJA’S portion of land. ERELU family and or his descendants which include us have been in possession of the land and has equally exercised various/numerous acts of ownership and possession over same including sales/assignments over time without any interference from anybody. It was the said Yusuf Ahmed and Adesegun Lawal who were engaged by one of our Assignees and in carrying out the tenets of their engagement, which include taking blocks to the site that the said land grabbers and hoodlums broke into the land on the 21st day of November, 2022, inflicted serious wounds and injuries on the two of them”, he said.

Meanwhile, information has it that, this is however not the first time that Peter Oriyomi Ogungbesan is engaging the services of Maiyaki and Taiwo to harass and forcefully take over Erelu Family’s land by way of invading communities.

The said Peter, whose his town shares boundary with Erelu Family’s land and having sold all his land, have encroached on other family land as well as privately owned land as a land grabber that he is alleged to be. Peter is also in series of contempt of court judgement linking one Mr. Ibraheem Eleniyan

The first act of encroachment on Erelu Family’s land was sometime in the month of October, 2021 when he made an attempt to take over the land, having forcefully broken in with the aid of Abubakar Maiyaki and Taiwo Enitiodunmo and their thugs, but when he saw that Erelu family were resistant and unwillingly to be forcefully intimidated and thrown out of their village, they allegedly wrote a concocted and frivolous report. Alagbon and consequently some members of the family were unjustly apprehended, detained and maliciously charged to court with the said matter still pending at the Magistrate Court, Epe, Magisterial district.

Using police to frivolous charge properties owners to court unjustly is one of the modus of operandi of the Maiyaki the landgrabber.