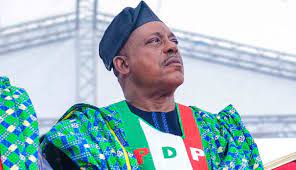 The National Working Committee (NWC) of the Peoples Democratic Party on Wednesday deliberated on the future of embattled Chairman, Uche Secondus. This came in the wake of the mass resignation of some National Officers of the Committee.

They cited the poor handling of the party’s affairs by the National Chairman, Uche Secondus; as the major reason for their decision to resign from key party organ.

Next Read: Lagos State Govt Delegation Pay Late Racheal Oniga Family Condolence Visit
In efforts to resolve the in-fighting, the committee presided over by the Deputy National Chairman North, Senator Suleman Nazif met at ‘Legacy House’ from 9pm Tuesday to about 3am on Wednesday in a desperate move to save the party and give the embattled National Chairman a soft landing, Apples Bite Magazine gathered exclusively from a high-placed source. The meeting reviewed recent developments in the party and resolved to continue deliberations on Sunday August 8, to enable all members to be in attendance before taking a final decision. Sources close to the meeting which was well attended further disclosed to Apples Bite Magazine that the chairman was excluded to allow members of the NWC express their minds dispassionately.

Members are said to be unanimous on the failure of the National Chairman and resolved to take ‘painful but decisive’ actions to save the party. They may in their next meeting, call for the immediate resignation of Prince Uche Secondus in order to save the Party. A member of the NWC who refused to be recorded said Nigerians are looking up to PDP to save the country and “we cannot fold our hands and allow the selfish interests of one person dash our collective National redemption mission”. In another twist, the PDP National Youth leader, Udeh Okoye, has threatened to dump the party if the National Chairman of the party, Uche Secondus, fails to resign from his position.

In a statement he issued on Tuesday, Okoye accused Secondus of lacking the capacity to take the party to the next level, describing him as a weak and incompetent leader. “He (Secondus) is not willing to take us anywhere, he is just there to make sure he enriches himself. I am here to make it very clear to all Nigerians that if Secondus does not resign, i am going to leave the party and resign for him to eat the party and own the party. “The governors, if they don’t wade into this matter right now, if the leaders don’t wade into this matter right now, I assure every Nigerian that within the next 3, 4 days, my letter will be public,” Okoye said.