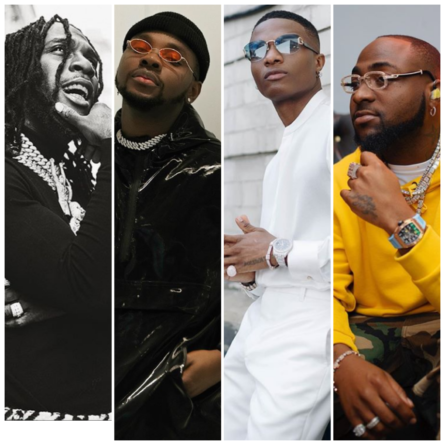 YouTube is a platform which offers artists tools to propel their music, grow their presence on the forum and accelerate the growth of their audience globally.

YouTube has played an immense role in the discovery and development of the African sound, exporting African music to listeners worldwide.

From Mark Angel to Teni Entertainer, Apples Bite Magazine brings you a list of Nigerian creatives who are doing well with their YouTube channels.

Suggested Read: Security: See How They’re Being Sent to God to Answer For Their Crimes

Top 20 Nigerian YouTube Celebrities
1. Mark Angel
According to Social blade, the Mark Angel Comedy channel on YouTube was the most viewed channel in Nigeria in September 2019.

Having over 6.53 million subscribers and more than 1 billion views on his 311 videos,Mark Angel is technically the biggest YouTuber in Nigeria and Africa as a whole.

The YouTube channel was the African comedy channel to reach 1 million subscribers.

2. Davido
Peaking at number 2 is Davido with 1.8 million subscribers.

In 2018, his hit song “fall” exceeded 100 million views, becoming the most-viewed video by a Nigerian artist on YouTube.

The Afro-pop star is one of the most viewed Nigerian artist on the streaming platform.

3. Flavour
With a subscription of 1.59 million on YouTube, it’s glaring that the controversial singer knows his onion.

He was catapulted to spotlight with his song “Nwa baby”. He has carved a niche (highlife) in the entertainment industry.

4. Tekno miles
Known for his versatility in singing, producing and songwriting, Tekno comes in as the fourth on the list with 1.43 million subscribers.

Her hit song ‘Johnny’ currently holds YouTube record of the most watched African Female (secular) video and the fourth most watched Nigerian music video of all time.

The fore front artist was featured alongside Mr Eazi and Tekno on “Don’t Jealous Me“, a track off Beyonce’s soundtrack album The Lion King: The Gift.

Yemi Alade featured in Beyoncé’s Black is King visual trailer and was announced to be featured in the movie set to be released and premiered on Disney+ on July 31 2020, then premiered for African countries on DStv Mnet on August 1 2020.

6. Sinach
In sixth place is popular worship leader and Waymaker crooner, Sinach who has been able to capture the hearts of 1.44 million people with her sonorous voice.

In May 2020, she became the first African artist to top the Billboard Christian Songwriters chart. Waymaker has become a staple song for worship in churches.

7. Burna Boy
The self acclaimed African Giant is the latest musician to get a ‘YouTube Artist Spotlight Story’ produced by Google’s video service.

He’s the first Nigerian artist to be chosen as an ‘artist on the rise’ by YouTube Music.

8. Wizkid
With 1.26 million subscribers, there’s no doubt that Starboy is making airwaves on the streaming platform.

From Come closer to Ojuelegba, Show you the money to Daddy Yo which ranks amongst his most viewed videos; Wizkid has shown that he’s a force to reckon with.

9. Patoranking
Having over 200 million views on YouTube and an impressive musical catalogue, Patoranking has flourish in his musical career with with his unique blend of African music and Reggae / Dancehall.

Patoranking is no doubt one of the most culture shifting visionaries at the forefront of African music.

10. Ada Ehi
Here’s another Christian singer entry. Ada Ehi’s hit single “Only you” was listed amongst the 20 most viewed Songs of the decade from Nigeria.

Garnering over 56 million views, Only You was ranked amongst 20 biggest songs of the decade on PulseNG.

11. AY Comedian
Having delve into various aspects of enteratinment, there seems to be no slowing down for AY Comedian.

His versatility has seen him gained huge following on social media platforms.

13. Timaya
His determination and resilience has seen him soar high in the music scene.

14. Kizz Daniel
The ‘Woju” crooner is one of the pioneers of contemporary Afro-pop music.

With 463,000 subscribers and over 150 million video views, Kizz Daniel is doing quite well in the music scene.

His new single “Ada” off his King of Love album has garnered over 1.7 million views in 4 weeks after being released.

From Drake’s manager, Oliver El-Khatib, to Barack Obama, his genre of music has caught the attention of all.

16. Dimma Umeh
One of Nigeria’s first YouTuber, Dimma Umeh has grown her platform to become one of the most-watched channels on YouTube. For tips and tricks on fashion, beauty and lifestyle, Dimma Umeh is your go-to channel.

19. Flo Chinyere
Flo Chinyere is a Nigerian-based cook passionate about cooking Nigerian meals. She provides content on recipes, culture and finance to her 314 thousand subscribers.

20. Teni Entertainer
Known for her unique hybrid of afrobeat, pop and rap, Teni has been able to carve a path for herself in the music scene.

The musical firecracker has drawn over 307,000 subscribers to her YouTube channel.