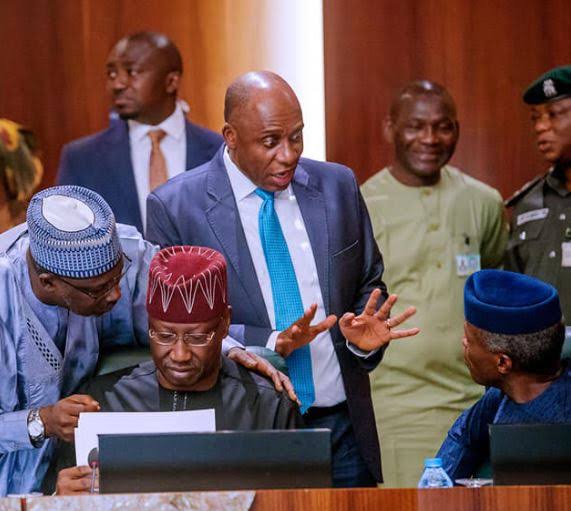 Contrary to reports that a Federal Executive Council (FEC) meeting of September 24, 2021, turned down a proposal for security equipment for the Abuja-Kaduna rail track, Apples Bite Magazine, can confirm that, Vice-President, Professor Yemi Osinbajo, not the FEC, actually turned down the proposal for reasons not unconnected to personal ambition in 2023.

A September 24, 2021 memo by the Minister of Transportation, Rotimi Amaechi, was deliberately leaked some hours ago, to dispute claims by the minister that he warned the particular FEC of the implications of standing down his memo, because the consequences might be grave.

Some of the reports from the leaked memo, had quoted a source, which claimed that, “We had doubts about the capability of a company, which was formed less than two years prior and had no track record of handling a contract of N3.7bn or a contract on surveillance systems. The company was also to be paid upfront. Our investigation pointed to a conflict of interest,”

The report, which quoted a top presidency official, noted that the minister, in his presentation, stated that the Bureau of Public Procurement (BPP), had reviewed the process of procurement and given a certificate of no objection for the contract, adding that the project would be funded from the N71.4bn budget of the ministry.

“The minister subsequently asked the council to ‘approve the award of contract for the procurement and installation of electronic surveillance system and interrogation unit on the Abuja (Idu)-Kaduna (Rigasa) 200km railway monitoring rail intrusion detection system and emergency response system in favour of Messrs Mogjan Nigeria Limited/Cagewox Dot Net Limited in the sum of N3,780,827,410.66 inclusive of 7.5 per cent VAT with a completion period of four months,” the report stated.

The firm, Mogjan Nigeria Limited, which was incorporated on August 6, 2019, the report claimed, was co-owned by Prince Godwin Momoh, Chioma Momoh and George Momoh, with a turnover of N84.9m, was not to be trusted with a contract worth N3.7 billion.

Unfortunately, the FEC meeting marked EC (2021) 236, and presided over by Osinbajo, at a time President Muhammadu Buhari was away for a United Nations General Assembly meeting, saw the vice-president stand down the memo despite repeated appeals by the minister, over what other cabinet members had come to dismiss as 2023 politics.

Thus, another presidency source, who disagreed with the reports making the rounds from the leaked memo, and cited a top presidency source, insisted that the decision by the vice-president to stand down the memo had baffled everyone at the meeting, because Amaechi’s submission was convincing enough to have secured the approval if Osinbajo had no ulterior motive.

“It’s sad that Amaechi’s warning eventually came to pass. I hate a situation, whereby someone prewarns and it comes to pass. Truly, Amaechi sought approval, after explaining the benefits of the security detection devices. His explanation was convincing and everything was fine until the vice-president asked that one question.

“Ask me what the question was? He asked Amaechi the brand of the devices to be brought. The question was not about the credibility of the company or how much they were worth in terms of turnover, because the fact the BPP had cleared the company had knocked off questions relating to such.

“So, the vice-president had no other place to hide than to ask: what brand? Now, ask yourself, of what relevance is that in the equation? None! The minister had brought many memos including the ones that approved the purchase of coaches and nobody asked for the brand. So, why ask for brand in this instance?

“That, clearly, tells you the vice-president had an ulterior motive and what that was, we all didn’t know. But the easier explanation or getaway is that it was not unconnected to the politics of 2023. Some of our colleagues said he probably considered Amaechi a threat and might have seen that move as a subliminal message. Whatever it was, certainly, it was not in national interest.

“But the sad part and why some cabinet members are angry, is that Osinbajo, who declined approval for the devices that would have saved the day, was the first to visit Kaduna to commiserate with families of the survivors and his foot soldiers have been everywhere lying to the observing publics.

“Therefore, whatever anyone says that is contrary to these explanations, is not true and might have been targeted at the minister, obviously for political reasons. Amaechi meant well with the memo and acted right. But the pastor? Let him deal with his conscience as far as this matter is concerned. We’ve lost eight people, several injured and scores still with their abductors on account of his indiscretion at the September 24, 2021 FEC,” he explained.

The presidency source, however, appealed to everyone to desist from playing politics with the Kaduna train bomb attack and come together in collective interest, saying, “What we should be looking at now is how to further salvage the situation and not apportion blame. The deed has been done, and the way forward should be our concern now.”