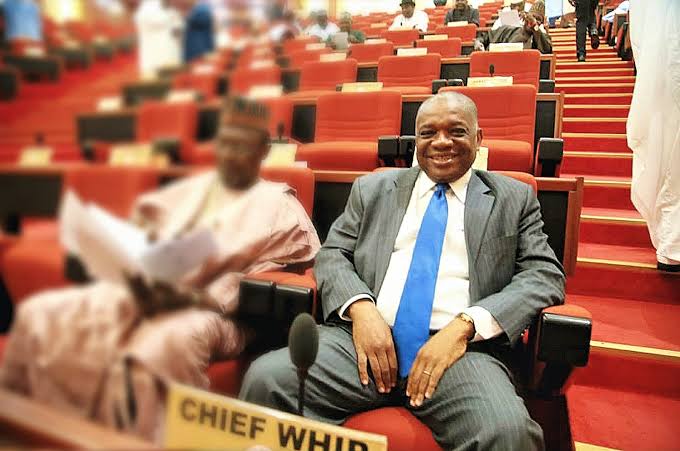 President of the Nigerian Senate, Ahmad Lawan on Tuesday, July 7 explained why the Senate refused to yield to pressure to declare Senator Orji Uzor Kalu’s seat and position vacant during the period of his incarceration.

Lawan told leaders of thought from Abia State that what Senate did by preserving Kalu’s seat and his position was not extra-ordinary but the right and just thing to do.

The delegation of the leaders of thought were at the National Assembly in Abuja to appreciate the Senate and it’s leadership for showing their concerns for Kalu during his incarceration.
Kalu was the Senate Chief Whip when a court in Lagos sentenced him to 12 years imprisonment in December 2019 for fraud committed while he was Abia State Governor between 1999 and 2007.

Kalu spent six months in the Correctional Facility before he eventually regained his freedom and returned to the Senate following the Supreme Court’s judgement which nullified his conviction on grounds of lack of jurisdiction by the trial judge.

Lawan told his guests that “there was no way anybody could convince us in the Senate that somebody should take the Abia North Seat because it wasn’t vacant.

“He(Kalu) was on several appeals and until he exhausted all the opportunities available to him, that seat remained his seat.
“Similarly the position of the Chief Whip, we didn’t even appoint an acting Chief Whip. The Deputy Chief Whip continued to play that role until he was released.

“We came under pressure, of course. But we thought the right thing to do was to keep that seat, that position until he was able to get his judgement.

“It would have been premature, unjust and unfair to declare his seat vacant or his position to be given away because he was in that situation.

“So we didn’t do anything extra-ordinary really. We did what was right, what was just, what was necessary.”

Looking at the bi-partisan composition of the group, the Senate President commended the leaders for the unity and understanding among them and their followers.

“It has been a long time, I have not seen or heard the kind of unity, understanding and desire to move a state forward in a bi-partisan way.

“Once the leaders are united, it makes it much easier for the followership to remain united and supportive so that reaching the promise land can be quite easy,” Lawan said.

The leader of the delegation, Senator Chris Adighije said the visit was to appreciate the Senate and it’s leadership for their concerns for the former Governor.

“We want to thank the Senate. It’s something that the entire Abia State and Indeed the South East appreciate very much,” Adighije said.